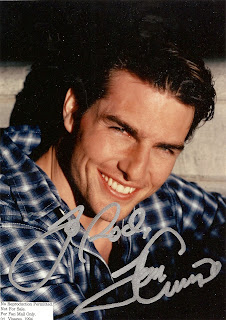 Ryan of Trader Crack's Card Blog got the autograph quickly this as did as did dkwilson.  dk got it 9 minutes after Ryan so Ryan get the double, which gives him a man on second.  I got this personalized photo for some work on the movie Without Limits.  We were shooting a race at Hayward Field and the reader board has all the athletes listed by first inital and last name.  I noted that one of the runners was G. Shorter and I told one of the assistant directors that I thought that should be F. Shorter, she went and checked and came back and said I was right and thanked me, as they changed it.  I had been at the race that we were filming in 1998, back when it actually happened in 1974.  I told a few people the story and they said I should write and ask for a credit in the movie.  So I wrote the Cruise-Wagner Company and asked for a thank you in the credits. It must have been a good letter as some one in the production company called and talked to my wife for 1/2 hour and then sent me a letter and this photo for my attention to detail.  I thought the reader board might be in the background of a shot, but at the beginning of the race there is a close up of it, so I am glad that it has the right name.  If you haven't watched Without Limits you should, it is a great ode to a track and field hero.
Zman of Autographed Cards once again got the literary character I asked about in the bonus question.  Thomas Hunter is the main character in Ted Dekkers' circle trilogy Black, Red, White.  Dekker had a new book came out in September 2009, Green.  Green is billed as the prequel to Black and the sequel to White.  I am really looking forward to reading this.  Now to recap the scoring;
Phungo-Phillies-Run Scored and a Man on Third
Ryan-Trader Crack's-Man on Second
Ryan-Angels-Man on Third