Bartman, The Goat and Steve Stone 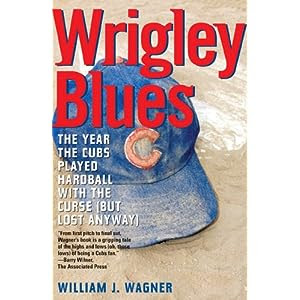 Wrigley Blues, The Year the Cubs Played Hardball with The Curse (but lost anyway) by William J. Wagner; 266 pages; 2005; Taylor Trade Publishing, Dallas, TX; 1-58979-212-2; $16.95; Checked out from Multnomah County Library, Gresham; 5/1/10-5/4/10
In 2004 the Cubs almost made the playoffs, they just missed the wild card slot, because of Steve Bartman, the curse of the goat and Steve Stone.  Bartman is still being blamed for the ways the Cubs play years after an innocent attempt to get a ball.  A goat and a curse from the early 20th century are also being blamed for the way the club plays in the 21st century.  And in 2004 broadcaster was blamed for not being enough of a homer and that was supposedly making the Cubbies play badly.
William Wagner presents a monthly recap of the exciting 2004 season when the team from the second city almost made the playoffs. He recounts in detail the up and downs of the season on the field, behind the scenes and amongst the fans.  He makes the season exciting by keeping an eye out for the unusual scenes that make up the season.  He really brought the season to life and kept me on the edge of my seat, snickering and laughing my way through the season.  Grade-B
Posted by Rod (Padrographs) at 9:43 PM

Sounds interesting to me Rod. Thanks for the good review.