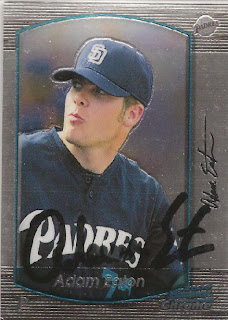 Adam Thomas Eaton was drafted by the Phillies with the 11th pick in the 1996 draft.  However before he appeared with them he was traded to the San Diego Padres, where he played six seasons between 2000-2005.  During that time he had Tommy John surgery and stabbed himself in the stomach with a paring knife while opening a DVD.  He was 47-41 with a 4.34 ERA while he was with the Padres. Since 2006 he has bounced around the league playing for the Phillies, Rangers, Rockies and Orioles.  I got this signed through the mail while Adam was with San Diego. 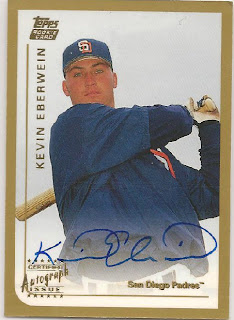 Kevin M. Eberwein was drafted by the Padres in the 5th round of the 1998 draft.  He climbed through the Padres minor league organization between 1998 and 2002.  He played in Portland at AAA in both 2001 and 2002 and at the age of 25 seems to have retired.  I got this card from Heaven Sent Sports Cards from a traded set. 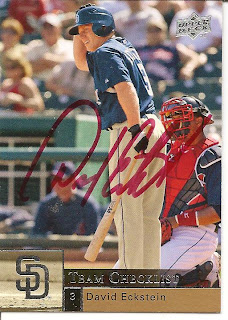 David Mark Eckstein has two World Series rings and is not going to get another this year, maybe next year, since he signed a extension with the Padres for next year.  He was with the Angels in 2002 and the Cardinals in 2006 when they he each won the Series, he was named the MVP of the '06 World Series.  He gave the Corvette that came with being named MVP to his brother Rick, the Nationals hitting coach, cause David can't drive a manual transmission (neither can I).  He signed a discounted contract with the Padres before the 09 season on the condition that he would play primarily second base.  I got this card signed through the mail by David earlier this year. 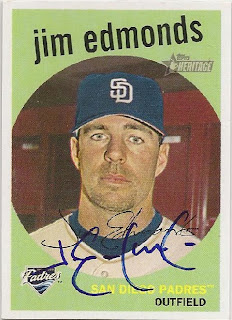 James Patrick Edmonds was a teammate of David Ecksteins in 2006 with the Cardinals when they won the World Series.  He was traded from the Cardinals to the Padres for Prospect David Freese.  In 90 AB for the Padres hit only one home run, and he was released and signed with the Cubs, where he had a decent season before being released. I got this signed through the mail, I remember looking for signed cards of Edmonds on ebay and then the card came back. 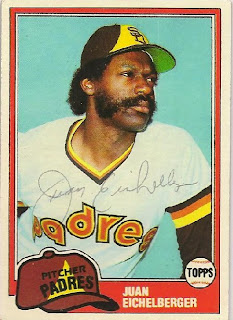 Juan Tyrone Eichelberger pitched for San Diego for 5 seasons between 1978-1982, going 20-25 with a 3.88 ERA.  He was traded to the Indians  in 1982 for Ed Whitson.  He pitched for the Indians in '83 and then bounced around the minors before resurfacing with the Braves in 1988 for his final season.  I believe I got the card from ABC Unlimited.