A Womens Place is at home...right after she rounds third 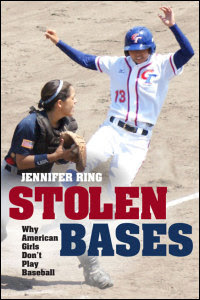 Stolen Bases, Why American Girls Don’t Play Baseball by Jennifer Ring; 2009; 200 pages; University of Illinois Press, Urbana and Chicago, IL; 978-0-252-03282-0; 9/17-9/23
Did you know there was a World Cup of Baseball in 2008 and Japan won it.  It started in 2004 and was won by the United States in 2004 and 2006.  The MVP in 2004 was Laura Brenneman of the USA and in 2006 it was Donna Mills of the USA and last year it was Kasumi Noguchi of Japan.  That’s right it’s women’s baseball.
Jennifer Ring has presented a conclusive case of how the game of baseball has been stolen from women twice.  Once when the game grew from rounders and girls were no longer allowed to play and again when softball became a ‘women’s’ game.  She provides ample evidence of how men have tried to make manliness the essence and have sissified softball.  However there are women making inroads.  She takes what could have been a very dry treatise on the subject and made it accesible and thoughtful.  I wonder who will be the first women to play professionally in the American Major Leagues and when it will be.  If you want more information on Womens’ baseball check out the American Women’s Baseball Federations site.  When a women makes it to the major leagues I hope all baseball fans will be there cheering her on.  I would like to see everyone who wants to play baseball be able to.  Jennifer Ring has opened my eyes.  RRRR
Posted by Rod (Padrographs) at 7:44 PM

Great post! I have a friend of the family who played (a woman) ball in the 40's and I have gone to events with her, but I was a little out of the loop on current goings on with ladies in hardball. As a roller derby supporter, I am a huge fan of woman's sports, I am gonna see if my library has that book, sounds like a great read.

I am definitely going to check this book out. When I was in high school I wanted to play baseball but was told I couldn't because there was an equivalent in softball.

I shoulda fought it harder but I didn't.