David Leonard Edwards was one of three brothers to play in the major leagues.  He had twin brothers Marshall and Mike Edwards who also played, Dave had the longest major league career at 5 years.  He was drafted by the Twins in the 7th round of the 1971 draft.  After three years with the Twins he was traded to the Padres before the 1981 season for Chuck Baker.  In two seasons with the Padres he hit .204 with 3 home runs, but that was in only  129 games over two seasons.  I don't recall how I obtained this signature. 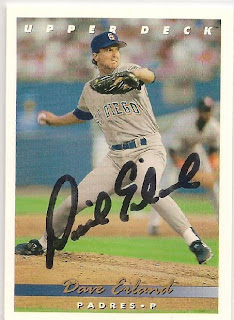 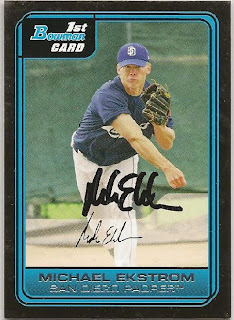 Michael Alexander Ekstrom was the 600th signed card of a Padre that I obtained.  Mike is from the Portland Metro area and went to school with the sons of a friend of ours.  I got him to sign an photo this year at one of the Beavers games.  His signature is small and compact no matter what he is signing.  Mike was drafted by the  Padres in the 12th round of the 2004 draft and made his major league debut in 2008 as a relief pitcher and has made several appearances this year for the Padres.  I obtained this signature through the mail last year. 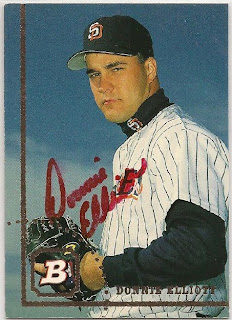 Donald Glenn Elliott was drafted by the Phils in the 1987 draft, he moved through their system and also through the Mariners and Braves before making his major league debut with the Padres in 1994.  He didn't have a great career but is credited with teaching Trevor Hoffman the change up that Trevor has used so effectively.  Donnie was a high school teammate of Andy Petite.  He is currently the baseball coach at South Houston High in Pasadena, Texas.  I got this signed through the mail a couple of years ago. 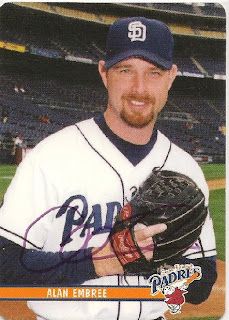 Alan Duane Embree is another player from Oregon, he has missed the second half of this season after having his leg broken by a line drive.  On July 7 of 2009 Embree was the winner in a game without ever throwing a pitch, just picking a runner off first.     He pitched for the Padres in 2002 as a reliever.  I got this signed through the mail in the last couple of years.