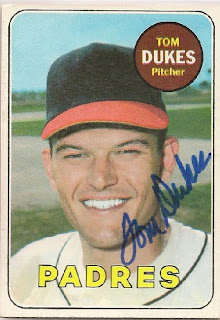 Thomas Earl Dukes was orginially signed by the Yankees as an amateur free agent prior to the 1962 season. Through a series of trades he ended up making his major league debut with the Astros in 1967, before being picked by the Padres in the expansion draft.  He played in 1969 and 1970 for the Padres before being traded to the Orioles, where he finished his career. I obtained the card from ebay. 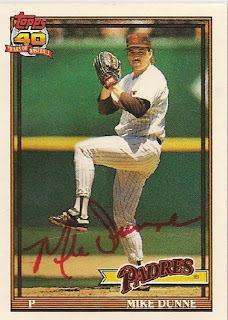 Michael Dennis Dunne was drafted by the Cardinals in 1984 and after a series of moves ended up with the Seattle Mariners.  Dunne was selected by the Padres in the 1989 Rule V draft and spent 1990 with them pitching in 10 games and going 0-3 with a 5.65 ERA.  He was released by the Padres in March of 1991.  He finished his career with the White Sox in 1992.  I got this signed through the mail a couple of years ago when I sent him the card along with a red Sharpie. 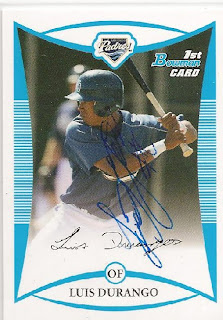 Luis A Durango has been with the Padres organization since 2005, since he played in the Venezuelan Summer League.  He made his major league on September 15, 2009 in the Padres outfield.  I got this signed through the mail last year when he was with the Fort Wayne Wizards (now Tincaps).

I have been missing because I have had to climb under the house to shore up and repair the bathroom floor.  Also our computer shut down for awhile and work has been insanely busy.  However I have been reading all the blogs and really enjoying them.