A Giants autograph from Padrographs

We have been hosting Japaneses exchange students for 10 years now.  Some have only stayed for a weekend, or a week or a month, but several have come and stayed the entire school year.  Some of them have been more memorable than others.  The first one back in 1999 Norimasa Ogi of Fujinomiya, down near Mt. Fuji.  Nori had a plan for while he was here and afterwards, he wanted to work for a re-seller of American goods in Japan. He had catalogs of all kinds of things, he could tell when a pair of Levis' had been made by the stichting in them, he could tell when a t-shirt had been produced by the hang tag in it.  Over the course of the year he was with us he probably sent 15-20 boxes home and at one point the gentleman that he was purchasing them for came and visited he and us.  Nori knew of my interest in all things baseball and managed to secure a autograph of a rookie in the league in 1999 named Tomohiro Nikoa.  I had lost track of the autograph and some cards that I had of Tomohiro.  Well the past week was supposed to be my annual reading vacation, but I made the fatal error of asking my wife if she would rather I didn't go and stayed home.  She said the shed and the attic need organizing, I would like you to stay home and do that.  So in one day I and my son, David straightened and reorganized the shed.  I spent the rest of the week going through many of my boxes in the attic, where I found many old pictures that I posted on facebook and some cards and things that I hadn't seen for ages.  One of the things I found was the autograph and cards of Tomohiro.  I didn't know if he was still playing so I asked Deanna, who has an awesome blog about Japanese baseball, Marinerds, etc, and she connected me to his current stats.  It was good to see he was still playing.  If you haven't ever read Deannas' blog she is an english teacher in Japan who is a huge baseball fan, and has gone to many games and become part of the cheering section for the Nippon Fighters, it is really interesting stuff.  Now if you thought I was going to write a lot and not show you a picture you are sadly mistaken. First is the autograph and then a couple of cards. 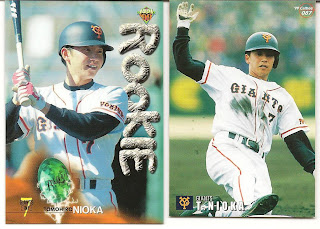