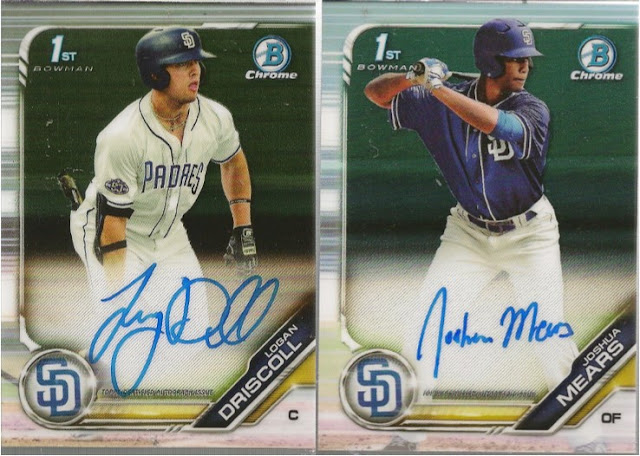 Both of these are from 2019 Bowman Draft Picks.  There is a third draft pick, but CJ Abrams is currently outside my price range.
#1188, Logan Driscoll. Logan was drafted in the second round out of George Mason.  He played with the Tri City Dust Devils in 2019.  I got to see him in several games against the Salem Keizer Volcanoes last summer.  I got him to sign a custom I made of him as part of a team set I made of the Dust Devils.
#1189, Joshua Mears.  Josh was also drafted in the second round of the drafted out of Federal Way High School in Washington.  He played with the Arizona Padres last summer.
Only eleven more to get to 1200 Padrographs.
Posted by Rod (Padrographs) at 5:54 AM

Do you need Abrams to be in a Padres jersey? If not, I can give you a Team USA autograph (technically a sticker graph).

I don't think so. I don't have any others that are in non padres unis. Thank you though

No worries. I'm going to a card show in a few weeks. I'll see if I can find an affordable autograph of him in a Padres uniform.