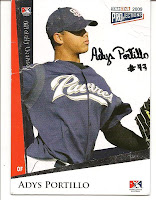 Aaron Andermom Poreda was drafted by the White Sox in 2007.  In 2009 he was traded along with Clayton Richard, Adam Russell and Dexter Carter to San Diego for Jake Peavey.  I think at this point that the Padres got the better part of the deal.  Aaron spent this season at Portland, so I got to see him pitch a few times.  I got this card signed through the mail.  Adys Portillo was signed by the Padres in 2008 and pitched in the minors in 2009 and 2010.  He will turn 19 in 2 months, so I am guessing that it will be a few years before he arrives in the majors.  I also got this signed through the mail.
Posted by Rod (Padrographs) at 6:13 AM