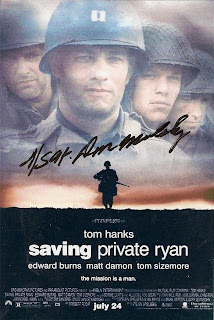 The signature is of Master Sergeant Donald Malarkey of  Easy Company.  He is one of the soldiers portrayed in the HBO miniseries "Band of Brothers", he was played by Scott Grimes, who also played Dr. Archie Morris on ER.  The signature is on a mini "Saving Private Ryan" mini poster, because of a story Malarkey told Stephen Ambrose that became the basis for that movie.  I met Sgt.  Malarkey last year at the annual Wordstock Book Festival, where he read from his book, Easy Company Soldier, and signed copies and other things.  He told me that he had an affidavit from Captain Winters that stated that the idea for Private Ryan came from Sgt Malarkey.  He was quite an amazing gentleman, and it was fun to talk with him.  This was one of two signatures of him that we got that day.  S


Phungo-Phillies-Run Scored and men on first and third FIRST RUNNER UP!


Lauren-Angels- Man on Second
Marks Epherma-Man on Second
Adam E.-Red Sox-Man on Second
BA Benny-Man on First
Brian-Rangers-On Deck
Dan-Indians-On Deck
Ryan-Orioles-On Deck
oopowham-On Deck
dkwilson-Diamondbacks-on deck
Thanks to all who played, it was fun trying to find signatures that might be hard to decipher.  If all of those who scored or had men on base will send me your hoody and t shirt size, the name of a favorite player or team I will eventually get something to you as a prize, sometime before the All Star Break.send your info to me at padrographs at live.com
Posted by Rod (Padrographs) at 10:40 AM

Band of Brothers is the greatest mini-series ever! That Malarkey autograph is awesome. An great addition to anyone's pc.

You don't have to send me anything if you don't want - the autos from your contest a while back were cool enough, I was doing this contest just to see how well I could spot them sigs!

But if you do decide to send something, Fred McGriff all the way. And I'm a size medium lol.

good stuff - and a well run contest - you did Spot the Sig Proud. it was good to see what someone else did with the idea and also fun to get a chance to play.