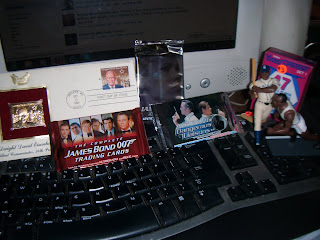 I went to a card show and this is what I came home with.  A Dwight Eisenhower First Day Cover, 3 packs of James Bond cards, Jesse Owens and Josh Gibbons and a 1990 Young Superstars Set with a Bip in it.  There were maybe 12 or 15 guys there with stuff, all though one was all coins, several were nothing but NBA (which Madding will probably hit), lots of old boxes, lots of 10 cent boxes.  One of my complaints is that much stuff isn't sorted at all, and that much of it is unpriced.   I saw several things at Beckett prices, and several dealers referring to the magazine. I didn't want to stand and go through lots of cards I don't want, especially when all sports, all years and all makes are lumped together.  I saw a couple of things I wouldn't minded having, an etopps Ted Kennedy and a Jerry West autograph but they were overpriced.  I won't bother going again, unless it is to meet people there.
Posted by Rod (Padrographs) at 1:57 PM

Sorry I couldn't make it.

I ended up not being able to make it because my paycheck didn't show up in my bank account for some unknown reason. I'm not really happy about that. There's usually 5 cent boxes that I end up spending hours going through, and I always end up needing to buy stuff from the supplies guy.

Holy crap! Is that a CRT? You really cleaned up at the show!
/jk