Someone asked about the Paul Quantrill card on page three.  He played in twenty-two games for the Padres in 2005.  The card is from a team issued Upper Deck set.

Here is page four after the balloting was completed.  Valdez got eight votes, Santiago got seven and Boch got one.

I watched Bip Roberts play High School Baseball, Minor League Baseball and Major League Baseball.  I talked to him a few times when he was at AAA about people from his high school that I knew.

My younger son, who will be thirty-one in eleven days is named after Dave Dravecky.  We have met and spoken with Dave a couple of times and somewhere I have a photo of the two Daves together.

One night after a Beavers game some of the players for the Las Vegas Stars didn't want to cram into the team van so I offered to give them a ride to the hotel.  Rafael Valdez was the only player I remember. 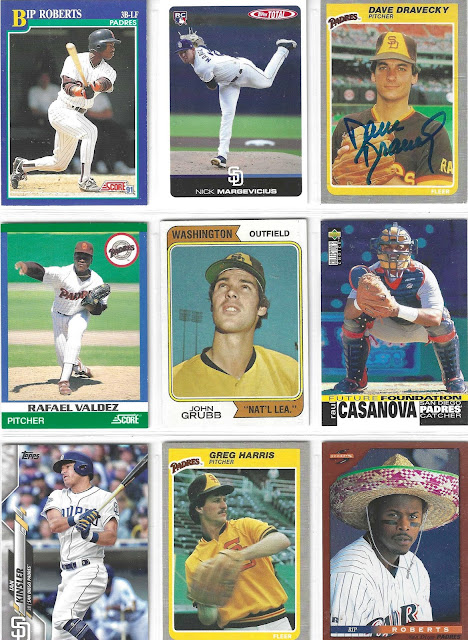 Here is the first battle of page five.

It is a three way battle between a couple of catchers and an outfielder.  One of the three was born just down the road in Corvallis, Oregon.

Your vote gets you entered into a contest after the ninety-ninth card.

Do you civic duty and vote for whomever you want if you haven't already.  Democracy needs an involved electorate.

This is the toughest one for me so far. Love them all. But I have always liked the extension in that follow through on the Wynne card. I vote Wynne for the win.

I always thought Marvell Wynne was one of the all-time great baseball names. He gets my vote.

I can't say any of these three cards move the needle for me, so to speak. I'll throw a vote Kennedy's way if for no other reason than the Padres' uniform in that photo.

"Democracy needs an involved electorate." Love that line. I might use it today with my students. This is a tough call. I love the 87T design and Hundley's catcher's gear... but I'm marking the box next to Kennedy. 85F is a really nice design... Kennedy is a solid name... but most importantly... Fleer did a great job with photo cropping on that card.

I'll put in a vote for Kennedy.

Gotta go with former Mets farmhand Marvell Wynne. I might have gone with Hundley but the tongue kind of ruins it for me.

I've always enjoyed the Wynne card and younger me thought that was a cool name...he gets my vote!

On this election day, my vote for this spot goes to a Kennedy all because I never got to vote for JFK.

Geez, I was the only guy who voted for Bochy?

Toss up between Wynne and Kennedy. I'll go with Kennedy. Tip of the hat to '85 Fleer.

Agree with the rest of the voters. This one is pretty tough. Wanted to go with Hundley as it's a more unique photo, but I will pick Kennedy as one can actually see the Padres jersey.

I would say the Kennedy card but Marvell has a great name! So let's go for Marvell.