Stan Jefferson won that battle eight to six.   Moving right along to the next spot, number fifty-six.  Two rookies from 2018 one who hopefully will be gracing the left side of the Padres infield for years and one who filled in around the infield in 2018 and has been playing in Japan for the last two seasons. 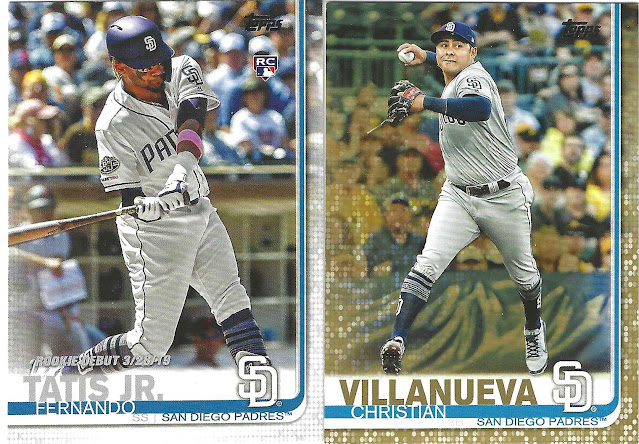 Thank you for stopping by and Thank you for your assistance.  Only forty-three more cards until we get to number ninety-nine.  There won't be that many more battles.
Posted by Rod (Padrographs) at 8:27 PM

i vote for tatis jr. fernando. even though it's a gratuitous extra rookie card, he deserves as many spots in the frankenset as possible.

I think my vote goes to Tatis.

Love Tatis, Voting for the Villanueva because it's a better card.

I love collecting Tatis... but for this Frankenset... Villanueva has the better looking card and has my vote.

Villanueva. Those colored parallels don't always look good on modern Topps designs, but this one does.

There are better Tatis cards out there. I'm voting for Villanueva.

not a fan of the design at all. GOLD looks best, imo.

The gold parallel would look much better in the album so I'm voting for Villanueva.

Was going to pick Tatis as I think it's a better looking photo, but slot 56 is a top middle slot and the Villanueva card pose fits better there. Villanueva gets my flipped vote.

I have to go with the Tatis card in this battle. I have always liked the rookie debut cards from Topps.