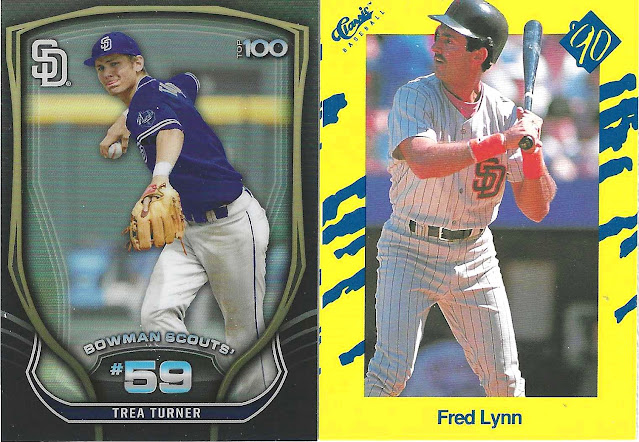 Mustache era fred lynn gets my vote. Lynn has the same number of ws championships as the padres.

I'll say Turner...a prospect card of an actual prospect (sorry if the trade depresses you though)

I love 90 Classic no matter whos on it, AND it's Fred Lynn!

Turner because there's actually a big "#59" on the front, and because that Classic design is, um, unappealing to the eye.

Lynn. Love the 1990 Classic design and the bright colors. Plus was a fan of Lynn when I was younger.

Voting for Lynn - I'm convinced if he never left the Red Sox he would have carved out a Hall of Fame career. (His swing was perfect for Fenway!)

Turner for me. The Classic card is a bit of an eye sore.

I did not realize that Trea Turner started in the Padres system, so my vote will go with this card.

Gotta go with Lynn - those Classic borders are crazy (but great!).

I was going to go with Turner just because that Padres hat was not photoshopped right at all ... but then I saw Lynn as a Padre and that's just weird, so weird Lynn on weird Classic card wins.