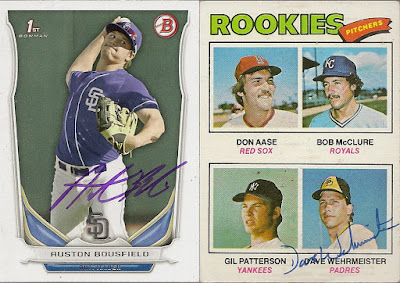 Padrograph #877, Auston Bousfield.  Auston drafted by the Padres last year and played in Eugene and is currently playing at Lake Elsinore.  Despite the photo on the card he is actually an outfielder.  This is my second signature of Auston as he was a part of the Emeralds team set I made last year.  I received this in the mail.
Padrograph #878, Dave Wehrmeister.  Dave was drafted by the Padres in 1973 and made his major league debut in 1976. Pitching for the Padres 76-78, he would later pitch for the Yankees, Phillies and White Sox.  Purchased this from a dealer on ebay.
Posted by Rod (Padrographs) at 7:50 AM