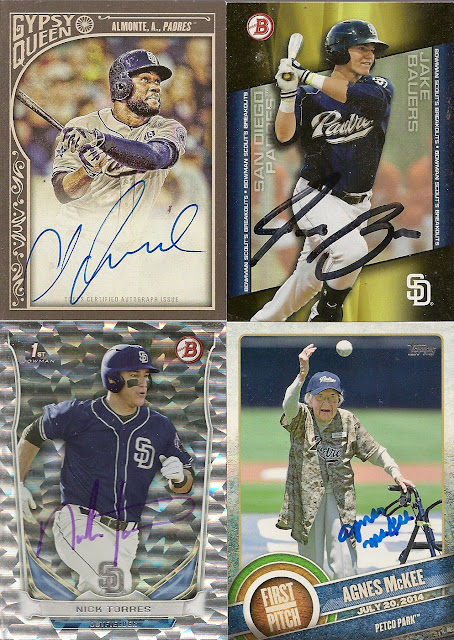 Padrograph #879, Jake Bauers.  Jake was drafted by the Padres in the 7th round in 2013.  He is currently in the Tampa Bay system, being part of the three team trade that brought Wil Myers to the Padres.  Got this signed through mail.
Padrograph #880, Abraham Almonte.  Abraham was part of the trade that sent Seth Smith to the Mariners. Picked this up on eBay.
Padrograph #881, Agnes McKee.  Agnes threw out a  first pitch for the Padres last year.  I found an article about her and where she lived and sent her some cards and she signed two and returned them to me.
Padrograph #882, Nick Torres.  Nick was drafted by San Diego in 2014.  He and his wife helped me get my Emeralds set signed last year.  I got this signed through the mail.
Posted by Rod (Padrographs) at 2:11 PM

Really cool that you got Agnes to sign that card for you.

Ditto what Dan said. If they'd gone w/a Charlie Sheen or Manny Pacquaio (sp?) card, it might've been a bit tougher to get back. Agnes seems rad.