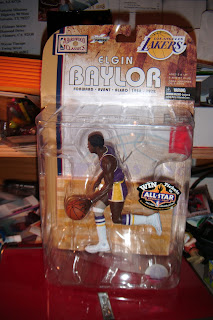 Elgin Gay Baylor (born September 16, 1934 in Washington, D.C.) is a retired Hall of Fame American basketball player and former NBA general manager who played 13 seasons as a forward for the NBA's Minneapolis Lakers/Los Angeles Lakers.
Baylor was a gifted shooter, strong rebounder, and an accomplished passer. Renowned for his acrobatic maneuvers on the court, Baylor regularly dazzled Lakers fans with his trademark hanging jump shots. The No. 1 draft pick in 1958, NBA Rookie of the Year in 1959, and an 11-time NBA All-Star, he is regarded as one of the game's all-time greatest players.[1] In 1977, Baylor was inducted into the Naismith Memorial Basketball Hall of Fame.[2]

RULES AND TERMS OF AGREEMENT
1.  The first person to respond that they want the item will be awarded possession of the item.
2. You agree that you will not return said item to Padrographs (or any of any his known or unknown aliases.) under any conditions.
3.  I do not need any thing in trade for you to take possession.  I am trying to move things that don't fit my collecting goals, or items that I have duplicates of.
4.  It may take me a few days to ship the item due to my and my wifes work schedules but I will get them out as soon as possible.
5.  email me your address at Padrographs at live dot com
6.  After one week of being available said items will probably end up going to the Salvation Army.
7.  New items will be posted each evening at 6 PM, Pacific Standard Time
Posted by Rod (Padrographs) at 6:00 PM

I would love to help you by taking this off your hands.