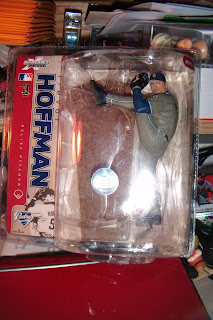 Trevor William Hoffman (born October 13, 1967) is a former Major League Baseball (MLB) right-handed relief pitcher. During his 18-year career from 1993 to 2010, he pitched for the Florida Marlins, San Diego Padres, and the Milwaukee Brewers, spending 15 1⁄2 years of his career with the Padres. A long-time closer, he is the Major Leagues' first player to reach the 500- and 600-save milestones. Hoffman was the all-time leader in saves from 2006 until 2011, the season after his retirement.

RULES AND TERMS OF AGREEMENT
1.  The first person to respond that they want the item will be awarded possession of the item.
2. You agree that you will not return said item to Padrographs (or any of any his known or unknown aliases.) under any conditions.
3.  I do not need any thing in trade for you to take possession.  I am trying to move things that don't fit my collecting goals, or items that I have duplicates of.
4.  It may take me a few days to ship the item due to my and my wifes work schedules but I will get them out as soon as possible.
5.  After one week of being available said items will probably end up going to the Salvation Army.
6.  New items will be posted each evening at 6 PM, Pacific Standard Time
Posted by Rod (Padrographs) at 6:00 PM