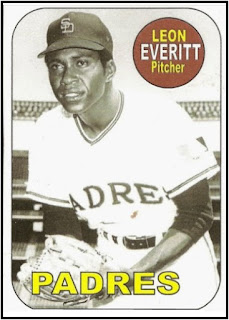 Leon pitched in 5 games for the Padres in 1969 going 0-1. That was the extent of Leon Everitt's  major league career.  He had been drafted by the Dodgers in 1965.  He was traded to the Padres in 1969 with Tommy Dean for Al McBean.  1969 was his final year in organized baseball.  After baseball he worked as a taxi driver, insurance agent and in construction in his home town of Marshall Texas, where he passed away in 2016. I got a copy of this signed through an autograph dealer.
Posted by Rod (Padrographs) at 2:33 PM