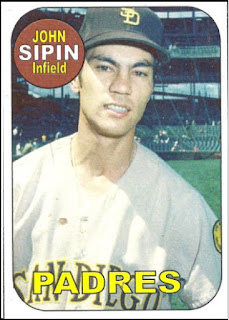 I started looking for other players from the 1969 Padres who didn't have cards.  Next I found John Sipin.  John had been drafted by the Cardinals in 1965 and played in their minor league system until being traded to the Padres with Sonny Ruberto for Bill Davis and Jerry Davanon.  John played in 68 games for the Padres in 1969, hitting .223 with a .319 slugging average.  In 1970 and 1971 he played in the Padres minor league system.  After that he went to Japan and played nine seasons there.  In '72 and '73 he won the Japaneses Gold Glove becoming the first foreigner to ever win that.  He played his best season in 1975, hitting 34 home runs and 82 RBIs with a .295 batting average. I found an address for him and sent him several copies of the card and asked him to sign one for me.  I have never heard back from him.