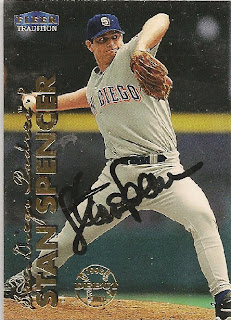 Stan Spencer was drafted by the Expos and then taken by the Marlins in the Rule 5 draft in 1992.  In 1997 he signed as a free agent with the Padres and made his major league debut with the Padres in 1998.  He pitched in 23 games over 3 seasons with the Padres.  He pitched through 2002 in the minors mainly for the Padres, spending his last season with AAA Las Vegas for the Dodgers.  I got this signed through the mail.
Posted by Rod (Padrographs) at 6:13 AM