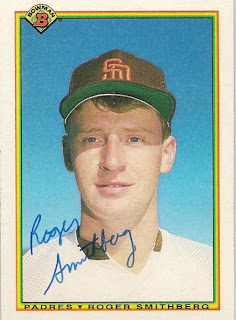 Roger Smithberg signed this Bowman card under duress.  In 1989 when Las Vegas came to town to play the Beavers I went to every game and got a ball signed by every one on the team and got all my cards signed that I wanted, except for Mr. Smithberg.  Most of the other guys would laugh when I told them, they said that he was afraid that I would sell it for big bucks.  When I told Manager Steve Smith about it, he took the card and the ball and told Smithberg to sign them.  This is the only card that I knowingly have where the player was told to sign the card by his manager.  He was drafted by the Padres in 1987 and signed by the A's as a free agent.  He pitched in 15 games for the A's in 1993 and 1994.  By the way there are currently 6 Smithberg items for sale on eBay, none of them signed.
Posted by Rod (Padrographs) at 6:13 AM