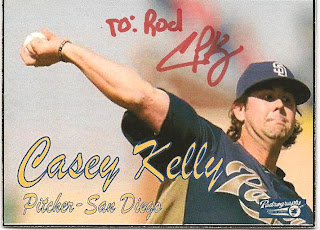 Topps has a monopoly and has chosen not to make cards of some of the Padres.  Over the last two weeks I have sent out cards to 19 different current and former Padres, many of the current Padres don't have cards I have made cards for several of them.  I mailed these three out last Monday and when I got home today.  Casey Kelly who was part of the trade that sent Adrian Gonzalez to Boston. 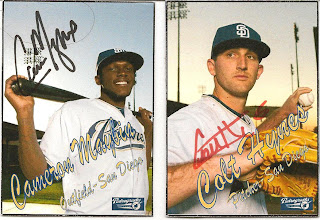 Cameron Maybin came over from the Marlins in a trade last offseason for a couple of the Padres relievers.  Colt Hynes was drafted by the Padres in 2007 and has worked his way the ladder, and is in camp this spirng as a non roster invitee.


Thank  you Mr. Kelly, Mr. Maybin and Mr. Hynes for your quick responses.
Posted by Rod (Padrographs) at 7:33 PM