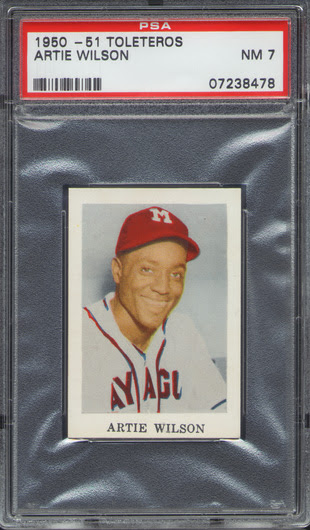 Blog Bat Around has come along and it has been awhile since I took part, but this topic intrigued me.  What if I had $50,000 to spend on eBay.  Since I collect the Padres there is not a lot of vintage out there for them.  When I think of vintage I think of stuff that is from the same era that I am.  Since I was born in 1957 that means vintage is really old stuff.  The first item to go in my shopping cart is a 1950 Cuban card of Artie Wilson, one of the greats of the Negro Leagues.  Artie and his double play partner Piper Davis were often called the best double play combination in the Negro Leagues.  Artie played in 19 games for the New York Giants in 1951 before the Giants called up a kid named Mays, because of the quota of African American ballplayers, Artie was sent back to the minors and never made it back to the majors.  He played in the PCL and settled in Portland.  My wife sews for Arties' wife so I have gotten to spend some time with Artie and talk baseball with him.  Next up is a signed Willie McCovey bat for $2,495.  Willie was one of my favorite players before the Padres came along and then I got to see him play for the Padres in my first ever Padres game.   While I was in Navy boot camp we got to go to a Padres game and see Big Mac and Dave Roberts play.  For $200 I found a 2010 Padres jersey autographed by the whole team.  Since I was born in 1957 I thought I would pick up some 1957 sets, I found a 57 baseball set for $9,600, a basketball set for $1,000 and a football set for $500.  The basketball set is extra cool because it has a player in it named Kenny Sears who my Dad played high school ball with.   I found a couple of other cool '57 items a unopened cello pack for $10,000 and a uncut sheet with Mickey Mantle on it for $2,250.  Then I found three signed items I would like to have, for $200 I could get a bat signed by the immortal Bip Roberts, for $13,000 a document signed by Dwight David Eisenhower who was president of the U.S. when I was born.  To me the two most beautiful women are Liz Taylor and Ann Margret, for $1,750 and $130 I can get signed photos of both of them.  That all comes to just over $43,000, I would use the rest to buy tickets to a Padres game, some Bip Roberts singles and as many 1957 Topps Hit Stars as I could to go with the Gene Kelly and Liz Taylor cards I already have.

That Artie Wilson card is SWEET!!! I must have it!