Too Much TTM Success

I had sent out some cards to be signed  and one of them came back in just 4 days, but then it only had to go to the other side of town and back.  I sent a card to Greg Burke with the Beavers and he signed it and sent it back, kept the ones that I said were for him.  I also sent a card to Yefri Caravajal and asked him to sign one and keep the other 11 that I sent him.  I even wrote in Spanish on the package that the cards were for him to keep.  I also bought a Jeudy Valdez from ebay.  I had sent Jeudy cards to sign last year and he signed the soft sleeve, so I have a soft sleeve signed by him, but I decided I wanted an on card auto of him, I got it for just a couple of dollars and it looks like the one on the penny sleeve.

When I send out cards to be signed I send a letter, a self addressed stamped envelope, a sharpie and some extra cards.  Most of the Padres I am able to pick up lots at a very low price so I offer the players the opportunity to have some cards.  Last year Edgar Gonzalez sent me a note thanking me for the cards and this year Clayton Richard said thank you on the inside of the envelope.  Maybe I ought to have my brother help me translate the letters into Spanish for the Hispanic players.  With the packages of cards I usually slip a little note in that says Thank you!  These are for you. or Muchas Gracias! Para Tu!  I don't know what to do cause this is what Yefri did. 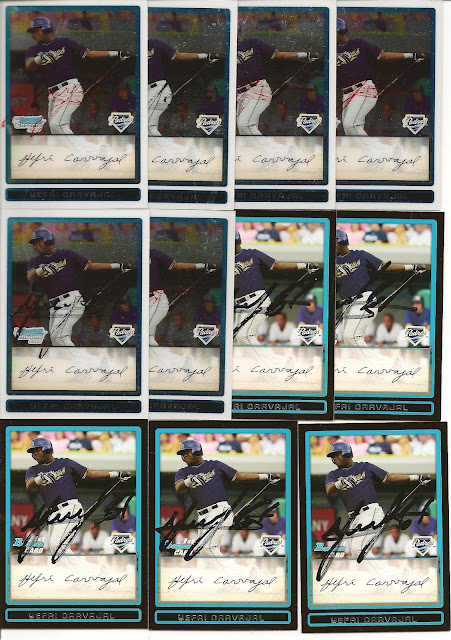 He signed all 11 of the cards that I had intended for him to have.  He signed with two different sharpies since some are red and some are black.  I had only erased the gloss on the one that I wanted him to sign, which is up at the top.  So all the rest of the them have some level of yuckiness to them.  If you want a Yefri Carvajal on card auto let me know I have a couple of them.

I was gone last weekend to the Oregon with my wife and five other couples for a get away.  It was one of the best weekends in a long time and this week has been spent getting ready for an 80th Birthday open house for my mother this Sunday.  I hope to post more regularly next week, I am taking the day off for my Moms' birthday on Tuesday and going to my first Beavers game of the year.
Posted by Rod (Padrographs) at 8:20 PM

You can set one of those aside for me if you don't mind. Have fun at the Beavers game!