An interesting response to a TTM request 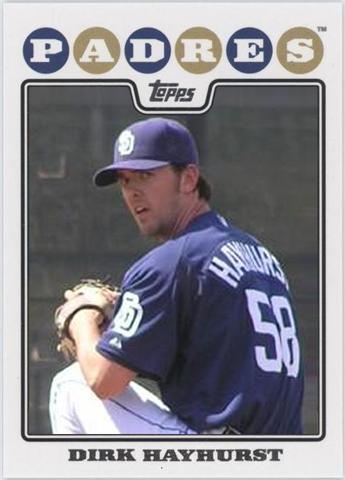 A few days ago I sent out 6 cards to 4 Padres and 2 former Padres. One of them was Dirk Hayhurst whom had been a career minor leaguer who finally made his major league debut last year with the Padres. At the end of the seasons he was placed on waivers and the Blue Jays claimed him. I had met him when he pitched for the Portland Beavers, I loaned him some books and we would talk about all kinds of things, but baseball. This morning when I got up and checked my email there was a email from Dirk Hayhurst, telling me that he had received the cards and telling me what he had been doing and that he had landed a book deal and been working on that. Lest you think it is just because he is a baseball player, you should read some of the stuff he wrote for Baseball America and the Canton Rep . I am looking forward to reading whatever he writes. It was awesome to hear from him.
Posted by Rod (Padrographs) at 5:45 PM

I did read his articles for Baseball America last season - they were very insightful about life in minor league baseball. I'm glad to hear that he has a book deal.

That's probably the coolest TTM response I've ever heard. I'll be looking forward to that book, I'm gonna have to keep my eyes peeled for that.