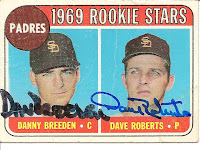 I picked up this card last week on ebay in the aftermath of Dave Roberts death. Several people were clearing out their Dave Roberts cards and I spotted this one. Got a good deal on the battery card, even though half of it never played for the Padres.

Danny Breeden and his brother Hal were both signed as amateur free agents in 1963, Danny with the Cardinals and Hal with the Milwaukie Braves. In December of 1963 Danny was drafted by the Cubs in the first year draft, December of 1964 saw him purchased by the Cardinals. In December of 1968 he was traded to San Diego with Phil Knuckles, Ron Davis and Ed Spiezio for Dave Giusti. He only lasted until June of 1969 in the Padres organization when he purchased by the Reds, where he made his made major league debut on July 24, 1969 against the Miracle Mets. In 1970 he was traded to the Cubs for Willie Smith. In 1971 he played where with the Cubs where his brother was playing his rookie season, they actually played together in 5 games for Chicago. That was it for Dannys' major league career, a few games in 1969 and a few in 1971, Hal Breeden played for parts of five seasons. Danny bounced around the minors for a few years. Before the 1973 season he was sent to the Padres in an unknown deal and then in 1974 he was part of a three team deal that went like this.
The Padres sent Nate Colbert to the Tigers, Detroit sent Bob Strampe and Dick Sharon to San Diego, the Tigers sent Ed Brinkman to the Cardinals, Saint Louis sent Alan Foster, Rich Folkers and Sonny Siebert to the Padres, and San Diego sent Danny Breeden to the Cardinals.
Posted by Rod (Padrographs) at 7:56 AM