Checking in and updating and wondering

It has been a heck of a summer.  On June 2, we finally were able to have the Military Honors Service for my Dad, who passed away on March 10, 2020 at age eighty-eight. 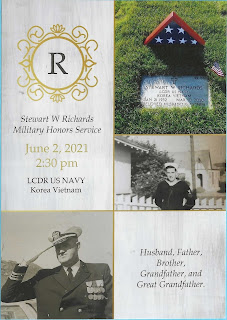 Just a couple of weeks later on June 19, which would have been my parents sixty-seventh Wedding Anniversary, my Mom passed away at age ninety-one.  The picture in the upper right was taken at my Dad's Honors Service. 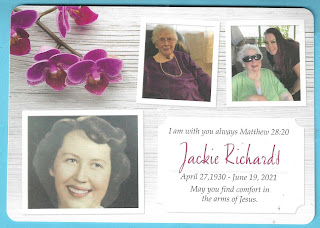 I have been exercising and eating better, so I managed to lose about thirty-five pounds.  I was walking about four miles a day, not quickly, but I was doing it.  I started experiencing intense pain in my right leg, so on June 22 I went to see a doctor.  I had walked my self into a case of patellar tendonitis.  I was told to stay off it and ice the heck out of it.  So I took four days off work and just laid around.
Shortly after that we had a Memorial Service for my Mom.  I did the sound and did a video of her life for that.
On July 28 I went to Seattle to see the Mariners play the Astro's.  The highlight of the game was the kid dressed as a trash can who stood up every time the Astro's were up to bat.
On the way to the game I tripped over some uneven sidewalk and bruised my knee pretty good.  Luckily there are lots of escalators at whatever stadium that is.  On August 3 I went to see the doctor again because I had extreme pain in my left leg.  The doctor said the bruising had caused an infection in my leg and I needed to stay off it and ice it heavily to reduce the swelling and put me on antibiotics for a week.  I took another four days off of work.
I hope that is it for this summer.
I have picked up a few Padrographs this summer.  It seems like I need to save up to get them this year.  I have picked up seven this summer.

Wayne Kirby went to somebody else and then came to me.  Aaron Rakers was a private signing.  Peter Summerville came back in the mail.  Ismael Means and Zayed Salinas are minor leaguers I have never heard of.  Jake Cronenworth seemingly can play anywhere on the field and do it well.  He has lobbied Jayce Tingler to play all nine positions in one game.  It was one of the more expensive ($49.99) Padrographs I have purchased.  Ha-Seong Kim was surprisingly cheap only $20.  That gives me 1,246 Padrographs.
I have been selling a bunch of stuff on eBay that doesn't fit into the mainstream of my collection.  It is a wide variety of stuff, captainamerica57 is my Ebay handle.
I have been wondering what the future holds for card collecting.  But it is beyond my control so I will just live in the present.
I don't know how often I will be posting, I have been reading all of your blogs.  I have seen some very interesting stuff.
Thank you for stopping by.
Posted by Rod (Padrographs) at 1:07 PM

Heck of a summer, I'll say!

Take care of yourself, Rod. And, yes, focus on what you can control, it is the happiest way.

Hey Rod. Sorry to hear about your mom's passing. Good to hear from you again and all the best for healing.

Condolences on the loss of your mother. And congratulations on the weight loss.

Hi Rod, sorry to hear about what sounds like a mostly terrible summer. Glad you are still able to read the blogs - and glad you added to your Padrographs. Like NO said, focusing on what we can control is really the only way! (and I, too, am wondering what my card collecting habits will look like in a few years)

Sorry to hear about the tough times! Stay healthy, good to see a post.

My condolences to you and your family, Rod. "Heck of a summer" sounds exactly right.

Sorry for your loss. It's nice to hear that your mom was able to attend your dad's Military Honors Service. Rest that leg of yours. I hope you feel better soon buddy.

This may be the first time I've ever offered condolences for one loss (your parents) and kudos for another loss (the weight). Take care of yourself!

Sorry about your mom, Rod. I can't even pretend to know how tough that would be. One would hope that the universe might smile upon you during this last month of summer and let something good happen, as this is just way too many terrible things for one person to have to deal with in a such short time frame.

Condolences on your mom's passing. Keep on taking care of yourself...hope you heal up quickly!