I just read that Hank Aaron passed away at age eighty-six.  I remember the first time I became aware of him.  In 1969 I lived in La Palma, California.  We were attending a church in Cerritos and I was active in the AWANA program there.  One summer day for an outing we went to my first ever baseball game.  We went to Chavez Ravine to see the Dodgers play the Braves.  Just being in those hallowed spaces was amazing, all that green.  We sat in the right field bleachers and right in front of us was number 44.  We watched the game and at one point Hammerin' Hank hit a home run and it landed in my scorecard.  Alas I don't have it as I was mobbed and someone took it.  I never saw who it was.  Being a twelve year old who had never seen a baseball game in person before and whose father preferred basketball and track and field to baseball I didn't know anything about any of the players.  I do know that even know at age sixty-three I will always remember that day.  Goodbye, So Long and Farewell to the All Time Home Run King.  Barry may have a few more but to me Henry Aaron will always be the home run king. 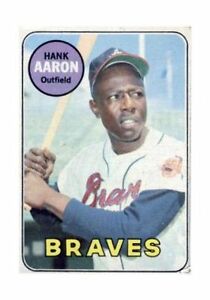 Thanks for the story. I envy you, even though you don't have the ball. #44 was my all time favorite, gotta get a post up about him tonight.

Dang. That is a cool story. I wish I was old enough to have seen the true HR king play. RIP.

I don't remember seeing him play, but by the time I was an avid collector... I knew he was the MLB home run king. And at one point, some of my nicest and oldest cards were of Mr. Aaron.

Wonderful story (not the part where the ball was taken from you of course). RIP indeed to the Home Run King.

What a cool story, although a damn shame someone would take any ball from a 12 year old. RIP Hank.