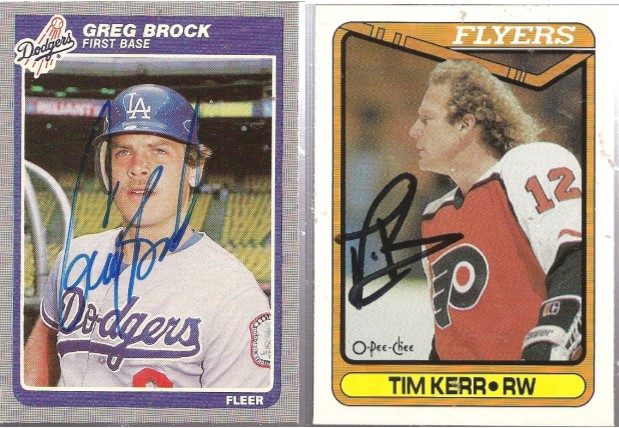 Christmas is coming and I have most of my shopping done.  I am taking part in the secret Santa that is being conducted by Jon over at a Penny Sleeve for Your Thoughts. Head on over if you want to join in the fun.
I have changed some of the things I collect.  I think I have found all the Bip Roberts cards I am ever going to find.  I have so much Eisenhower stuff I don't know what to do with it all.
I added three Padres minor leaguers to my list to collect.  I have met Travis Radke and Jonny Homza at Low A games.  Nick I read a great article about him in The Athletic, he made his major league debut this year.
Just two cards to add to the Frankenset this week.  Local boy Greg Brock replaces Reggie Roby because I sent him off to someone who collects him.  Tim Kerr is a cool looking hockey card that filled a need.
The Frankenset page and the Frankenset want list have been updated.

I tried looking for cards of Radke and Homza for you, but couldn't find anything out there. If Nick made his MLB debut this year, then he's gotta have some cards. What's his last name?