A bunch of new Padrographs takes me up 1025

This week I received some customs back and some cards I purchased from ebay.  This batch brings me to 1025 unique Padrographs.

Cory Burns pitched in 17 games for the Padres in 2012.  This is a custom that I made and got signed through an autograph dealer.

Jarred Cosart pitched in nine games for the Padres in 2016.  He is on the roster at this point in Spring Training.  He has been in the majors since 2013 and has played for the Astro's and Marlins.  I picked this up on Ebay.

Reggie Lawson was drafted by the Padres in the second round of the 2016 draft.  He is only nineteen years old so it will probably be a few years before we see him at Petco Park. This is a 2016 Bowman I found on Ebay.

Justin Leone played in one game for the Padres in 2006, he had one plate appearance and one at bat.  He played in 2004 for the Mariners.  This is a custom that I made and got signed through an autograph dealer.

Scott Patterson pitched in three games for the Padres in 2008 and one game for the Yankees that year.  He has no wins and no losses in his major league career, and has 1.93 ERA. Another custom that I got signed. 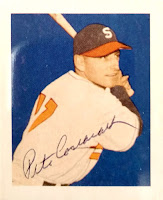 Ryan Schimpf was a 28 year old rookie last year who played in 89 games for the Padres last year.  He was named to the Topps All Rookie Team and is due to be playing for the Padres again this year.  2017 Topps Heritage that I got from Ebay.

Mason Thompson was drafted by the Padres in the third round of the 2016 draft.  He just turned nineteen in February so it will be a few years before we see him on a major league mound.  This is a 2016 Bowman that I found on Ebay.

Ron Tingley played in eight games for the Padres in 1982, he didn't return to the majors until 1988.  He played eight more years in the majors with Cleveland, California, Florida, the White Sox and Detroit.  This is a custom that I got signed through an autograph dealer. 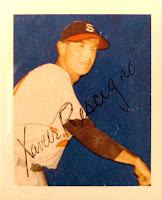