A couple of TTM sucess and some new collecting goals 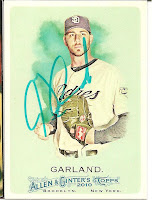 I had sent this to Mr. Garland back in February c/o the Dodgers Spring Training, somewhere other than Vero Beach, and received it back yesterday.  Garland spent one season in San Diego, before becoming a Dodger double dipper.

Ken Reynolds played 6 seasons in the majors with the Phillies, Cards, Brewers and Padres.  He pitched in 19 games for the Padres in the Bicentennial summer of 1976.  He went 0-3 and saved 2 games.  I sent this 2011 Padrographs to him and it came back in a week.  That is coast to coast to coast in a week, from Portland to Massachusetts and back. Thank you Mr. Garland and Mr. Reynolds.

I have embarked on a couple of projects that I will be sharing with you soon.  I will be posting a want list of autos I still need soon.  I am trying to get all of Heath Bells cards for 2011, all the base and variations and parallels.  I have a large amount of 2011 Topps and Heritage, so if you need some let me know.  I am still trying to trying to get more Padrographs and Bip Roberts cards.  Padrographs are getting harder to find and hopefully some of the guys from last season will be signing their Padres cards.  The Bip Roberts cards are parallels and team issued stuff that is turning out to be harder to find than I thought.
Posted by Rod (Padrographs) at 9:30 AM