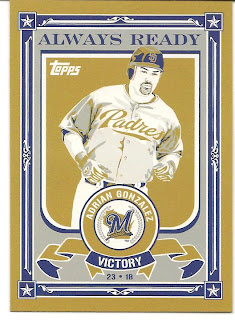 I was excited when I heard that Topps had gotten Chris Speakman to do propaganda style posters for an insert set.  I hoped the Padres would not be ignored, but when I looked at the prints available there was none for the Padres.  So I figured I got screwed again.  But then I typed in eBay propaganda Padres and there was an Adrian Gonzalez card. YEAH!  Then I began to look at the card, right colors, right player, but whiskey tango foxtrot, why the hell is there a Brewers logo right in the middle of the flippin' card.  Speakman didn't do this, Topps did, they gimmicked it up to do who knows what.  Topps you people can be freakin idiots sometimes, all this does is show that you are either too dumb, too lazy or just plain stupid to think that this would be exciting to anyone who is either a Brewers fan or a Padres fan.  It is just an insult to the fans of both teams.  I like my Adrian Gonzalez card, but thanks to you, it's just another screwed up card.

whiskey tango foxtrot- that is great!

That would have been a nice looking card if it was done right.

I think you used the wrong Adrian in the last sentence. Either that or it's a well placed Topps-like error.

That is a Solid Rant -

I think it's kind of insulting on a lot of fronts. Inserts should be special on their own merit not some sort of gimmick.

That does suck, but I also got a laugh from the whiskey tango foxtrot line.