Always a Red Sox to me. 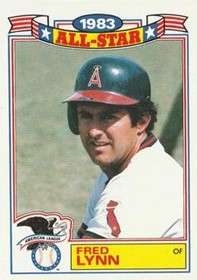 Fredric Michael Lynn made nine straight All Star Games between 1975-1983, for the Boston Red Sox and California Angels.  In 1975 he was the American League MVP and Rookie of the Year.  Between 1985-1989 he played for the Orioles and Tigers.  He finished his career in 1990 playing in ninety games for the Padres.  I have a signed card of him in my Padrographs where he is number 489.  When I hear Fred Lynn's name I only think of one team, the Boston Red Sox.  He was drafted by the Red Sox in the second round of the 1973 draft, he made his major league debut with the Red Sox in 1974 and played for seven seasons before being traded to the Angels with Steve Renko for Joe Rudi, Jim Dorsey and Frank Tanana.  Fred is featured here on his last all star card from 1983 Topps All Star set where he is card number 7.
Posted by Rod (Padrographs) at 6:15 AM

I've said this before on other blogs, but I truly believe he would have been a Hall of Famer if he spent his whole career with Boston. He had a swing tailor-made for Fenway.

Absolutely agree, and he even played for my Tigers in the late '80s.

As a kid, I only ever knew him as a Padre.

The Red Sox are definitely the first team I think of when I hear Lynn's name, but I can also picture him as an Angel. Most of that has to do with my early collecting years.

I like those All Star cards. Although that's not a great photo of Fred.