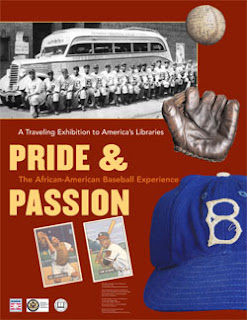 Hey I know you were all awaiting breathlessly for me to post something.  Well here you go.  I just read a history of the Pacific Coast League Padres and reviewed it.  Today I did yard work, took my son to work and picked up dinner for my wife (where I had to wait for 1/2 hour for her break).  Read a little bit in Willie's Boys, the story of the 1948 Birmingham Black Barons and the last Negro League World Series.  It is a fun read because I have always been a fan of Willie Mays and one of the players on that team was Artie Wilson.  I got to spend some time talking with Artie before he passed away last Halloween.  My wife sewed for Arties' wife and when Ruth had something to pick up or drop off I would often go over and talk with Artie.  It was great to hear stories of Josh Gibson, Jackie Robinson, Cool Papa Bell and be introduced to Piper Davis.
A couple of years the Multnomah County Library, whom I work for applied for the right to host an exhibit from the National Baseball Hall of Fame, titled Pride and Passion, the African-American Baseball Experience.  When they began to write the application Amy, who was writing the application was told to talk with me about it.  I gave her some input and she sent in the application, and the library was granted the right to host the exhibit.  We will be hosting the exhibit November 30, 2011 to January 27, 2012.  Cindy who got the assignment when Amy left is working to fill 12 display cases with cards, posters, scorecards and all kinds of other things to fill the gallery space.  I am loaning some of my Negro League stuff, which centers around Artie for the exhibit.  I know some of you collect Negro League stuff, if you would be interested in loaning some stuff for the exhibit please let me know.  It would be mailed insured and insured while on display and returned to you upon the end of the exhibit.  There will be security on the exhibit at all times, the gallery is in the Central Library in downtown Portland.  If you want more information contact me at Padrographs at live.com or call me at five oh three eight nine one one six six one.
I am going to try and post more regularly, but unless the Padres improve some I may still be to depressed to post at all.  I have to clean up my mancave also so that I can find some stuff, as I clean I may be sending some stuff out.  I just found a Penguin that will be going to New York.
Even though I haven't been posting I have been reading all of your blogs and keeping up with things.
Posted by Rod (Padrographs) at 9:09 PM

That second-to-last paragraph caught my eye.

i thought it might. I will be sending you something this week.