Last Wednesday I took the day off and went to PGE Park to watch the Beavers play the 51's.  It was a good game, Beavers fell behind early and then came back to win the game 6-3.  Lance Zawadzki should have been the game MVP.  Before the game I was able to go stand next to the dugout and try and get some auto's, I was trying for six guys, Radhames Liz, Adam Russell, Lance Zawadzki, Cedric Hunter, Mike DeMark, and Mike Baxter.  Only Hunter has a Padres card that I could find, so I made some Padrographs cards.  I got 4 of 6, Liz and Russell didn't come out until after the game had started. 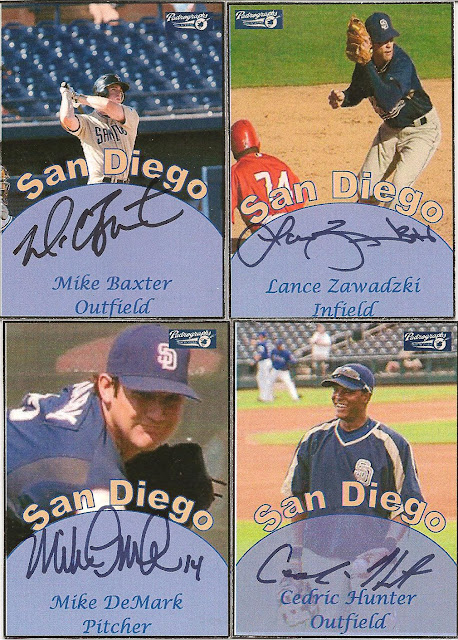 Today is a day that I take off every year, the second Tuesday of July.  I don't want to rush home to watch the All Star game so I just take the day off.  Today I helped my wife clean and shine our hardwood floors and then sorted two 3,200 boxes of Padres into the appropriate alphabetical categories, I still have two more 3,200 count boxes to rough sort alphabetically then I will sort them by player.  When the mail came today it contained a self addressed stamped envelope that I had sent out a couple of weeks ago.  I had mailed Aaron Cunningham a Topps 2 card and one I had made.  With the pen I sent him the Padrograph card looked better.
The Cunningham brings me up to 754 different players that I have Padres cards of.  I have a few things up for sale on ebay right now, some stuff from 2010 Allen and Ginter, some vintage football and vintage non sports.
Posted by Rod (Padrographs) at 6:26 PM

I went to the game on the 4th and Zawadzki had at least 3 or 4 really nice defensive plays.