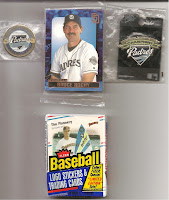 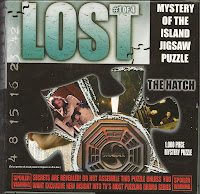 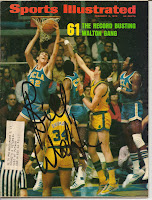 A Couple of weeks ago Rob Deez, Isacc Cheong and Kenny Eng swung through Portland on their Adult Books Tour.  Driving them from San Diego to Portland and back again was Travis Peterson, the driving force behind Punk Rock Paint.   We met at Proper Eats, a vegan cafe, that was hosting a photo exhibit while the guys were trying to sing.  Travis brought me some really cool stuff, which I will now share with you.

A couple of pins from the Padres, the All Time Padres Team set and an 1988 Fleer Cello Pack with Tim Flannery on top.


A LOST jigsaw puzzle that I think may have some other goodies mixed in.

Actual nameplates off the backs of Ryan Klesko and Boomer Wells.

A couple of cards of the Worlds Greatest Hitters both in the Hall of Fame, both from San Diego and both former Padres.

A 1973 Sports Illustrated autographed by Basketball Hall of Famer, great Trailblazers center and all around groovy guy, Bill Walton.  This particular item was obtained for us by the lovely and talented Kerri Dopart.


Several Bruce Bochy cards that I needed for my run of Padres managers. 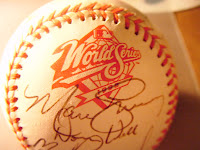 A baseball signed by the entire team that lost the 1998 World Series in four straight games.

This is what I think might be hidden in the Lost Jigsaw puzzle is the rest of the 1990 Topps Bip Roberts actual size jigsaw puzzle.

Thanks Travis, this is some really awesome stuff.
Posted by Rod (Padrographs) at 9:28 PM