I went to the card show today and ran into Gavin of Baseball Card  Breakdown.  I didn't find any Padrographs I needed.  I did pick up several packs of cards so I will present them over the next few days.   Today's pack is Topps 2001 Series 2.
Doug Glanville, played in the majors from 1996-2004.  Since 2008 he has been writing for the New York Times.  He wrote a book in 2010.
Delino DeShields, played from 1990 to 2002.  His son has been playing in the majors since 2015.
Tom Lampkin is a local player who played from 1988-2002.  He played for the Padres in 2002.
Shane Spencer was once featured on the cover of Sports Illustrated.
The pack also featured:
Mike Myers, Rockies
Tino Martinez, Yankees
Pete Schourek, Red Sox
Mitch Meluskey, Tigers
Kip Wells, White Sox
A.J. Hinch, Royals
Garreet Stephenson, Cardinals
Esteban Loaiza, Blue Jays
Billy Wagner, Astros
There was a draft picks card and a Pirates team card that seems to be missing something (upon further review it is not). 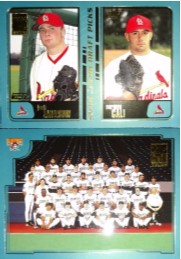 I could use that Hinch if you don't need it.

That's some solid research for a pack of 2001 Topps! You should write posts for A Pack To Be Named Later.