Goodbye and Thank you Tony Gwynn 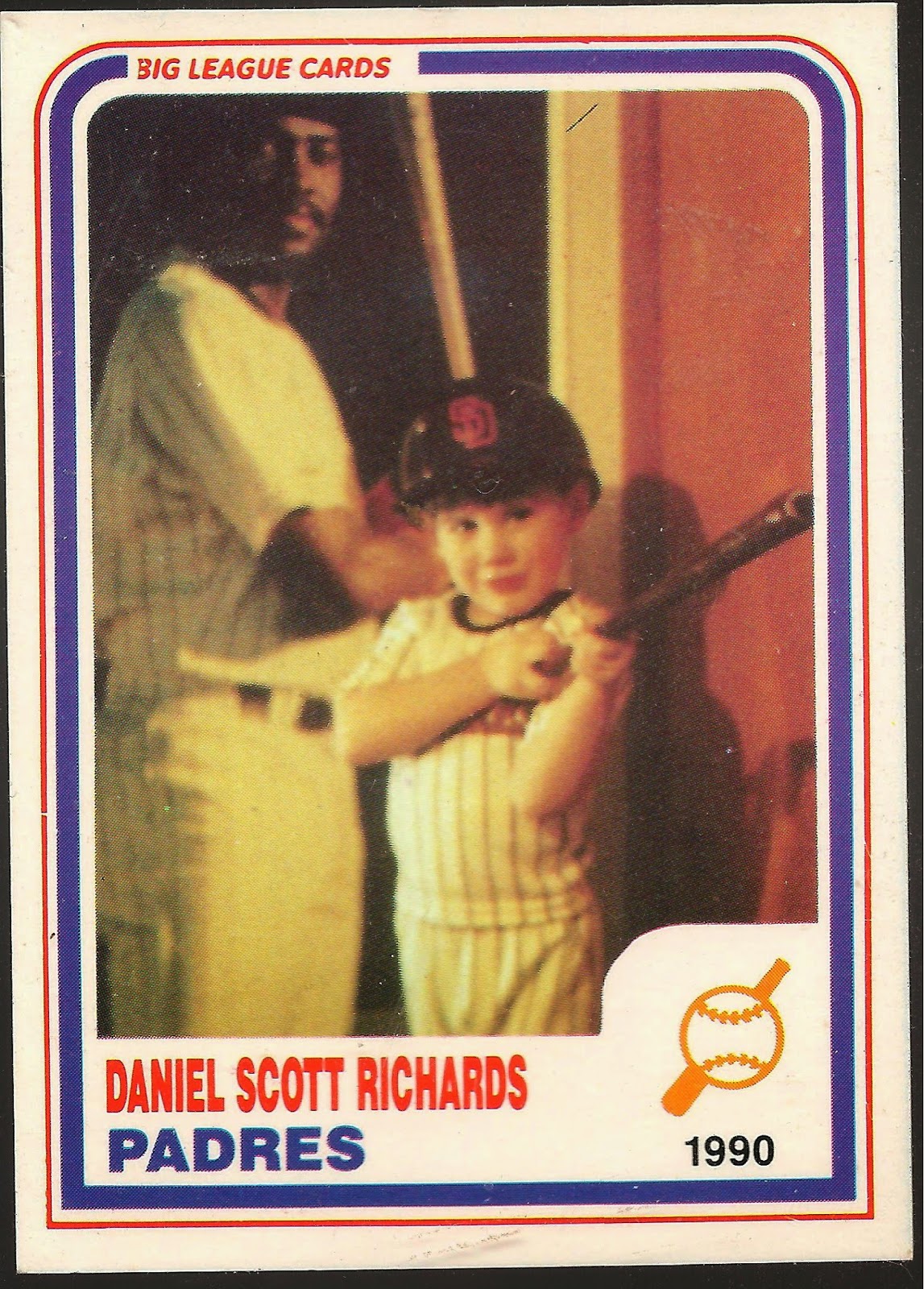 Shortly after I got to work this morning I got a message on Facebook asking me if I had heard about Tony Gwynn.  I hadn't so I googled Tony and found out that he had passed away at age 54.  I sat at my desk for awhile surfing to try and figure out what happened.  I had known about the cancer but thought he was getting better, he just did an interview last Wednesday and had just signed a one year extension to return as the Head Baseball Coach at San Diego State.  The last time I saw Tony was last year when Travis Peterson (PunkRockPaint) and I went to a Padres game which had a reunion of the 1998 team that went to the World Series.  He sounded upbeat and well.
I had the opportunity to meet Tony in person three times.  The first was an appearance at Nike Downtown in Portland, where we gave him a copy of the card at left.  Than is my oldest son, now 27, when he was four in front of a Tony Gwynn growth poster, which had been a giveaway at Jack Murphy Stadium.  Daniel was four when we gave the card to Tony, Tony told him that he would put it in his locker with the other cards like this.  Daniel talked about that for quite awhile.  I saw him at a small card show in Portland when I got his signature on some stuff.  The last time I saw Tony and spoke with him was at a large card show at Portlands' Memorial Coliseum. The local card shop I was working at had several tables at the show and we knew the promoter well.  He knew that I was a big fan of Tony Gwynn so he assigned me the job of sitting next to Tony for two hours and passing items to him to be signed.  That day became known as "Rods' Day with Boggs and Gwynn", because along with Tony was his longtime agent, Johnny Boggs.  As we sat and talked while signing Johnny and Tony looked through my card collection commenting on the cards, many of which they had never seen before.  Tony was a great conversational even with a fan boy who was awestruck to be in the presence of his hero.  We talked about all kinds of things, including that we would have gone to the same high school if my family had stayed where I was born in Long Beach, California, Tonys' hometown also.  I was a couple of hours that I will never forget and am saddened that others will no longer have that opportunity.  Tony was a great ballplayer but more than that he was a great person who will be missed. 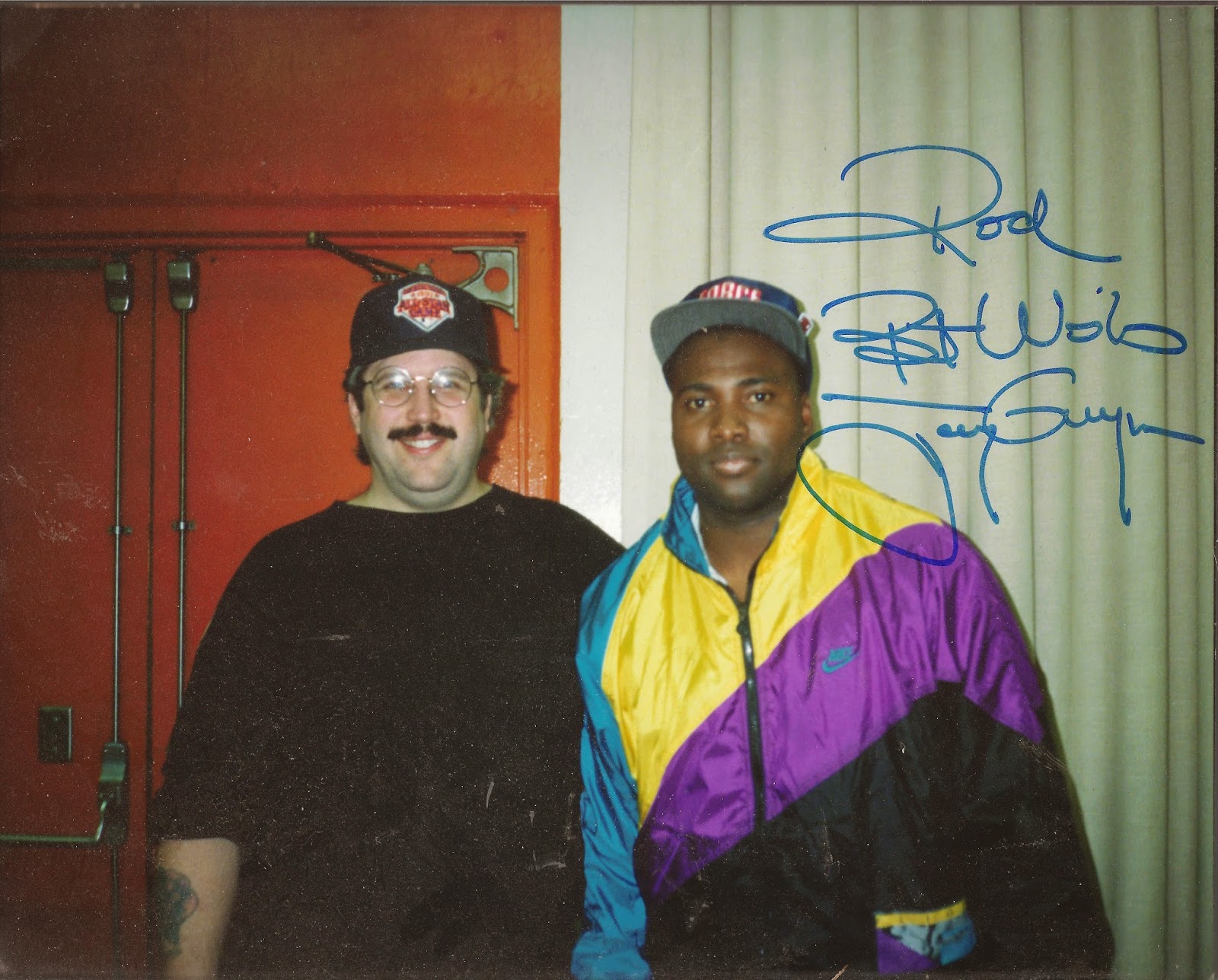 Thanks for the post, reading stories like this have helped make it through the day. I grew up in Poway and went to high school with Tony Jr. (a few yrs behind him), and managed to get a few Tony autographs. Only have one on a baseball card, though, and that's from you. Appreciated you sending it to me then, really appreciating it now.

Wow, great story. Must've been an amazing day for you. Love Gywnn's jacket in that photo!

I'm struggling with the loss. Hearing stories like this helps.

Hope I can see you again soon, Rod.

Love reading these kinds of stories. Gwynn has been my favorite player for nearly three decades and I never met him once. I had the opportunity to meet him last year, but had prior plans. It's one of those regrets I'll have to live with the rest of my life.