Blackball Tales, Rollicking, All New, True Adventures of the Negro Leagues by the Men who Lived and Loved Them 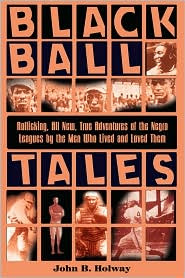 I really wanted to read the last chapter first because it was a chapter on someone I have met. This book is a wonderful collection of oral history by the men who played in the Negro Leagues, not the Jackie Robinsons, Satchel Paiges or Monte Irvin, but the players who just wanted to play baseball and the only way they could do so was to play in the Negro Leagues. There are a few refrains repeated throughout, I wish I had been younger after Jackie broke the color line, we lived on buses, oh how I wanted to play, Willie Mays Dad was a better ballplayer, Piper Davis and Artie Wilson were the best double play combination and prejudice was actually worse in the North.

The final chapter is an interview with Artie Wilson, shortstop for the Birmingham Black Barons and the New York Giants. He bounced around quite a while in the Pacific Coast League. He was the last played to hit .400 in the Negro Leagues. He roomed with Willie Mays while they were both playing in Birmingham, he toured with Satchel Paiges All Stars and played in several All Star Games. He bought his first uniform as a kid for $2.98 with the money he made shining shoes for 2 cents a pair. He lost part of the thumb on his throwing hand in an industrial accident and squeezed a golf ball all winter to strengthen his thumb.

My wife is a custom tailor and years ago she got a call from a African American woman whose last name was Wilson and lived in town. I asked my wife to ask her if Artie was her husband, he was. After that when R went over to meet with D to talk about sewing, I would go with her and talk to Artie. It was a pleasure to hear him tell stories of Josh Gibson, Piper Davis, Cool Papa Bell, and Jackie Robinson among others.