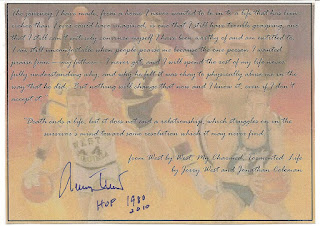 Last October during the Wordstock book festival I started typing up passages from books I read and asking the authors to sign them.  I have sent passages out to some authors and received them back signed.  This is the most recent, I read Jerry Wests' autobiography and chose this passage and sent it to him care of the Warriors and after about three weeks I got it back, it will go into my authorgraphs scrapbook.

I picked up three Padrographs from ebay that I didn't have, Brad  Brach, Dustin Moseley and Chris Denorfia. I have these cards out in the mail to Dustin and Chris, but it has been over a month now.  These 3 cards give me 801 different Padrographs. 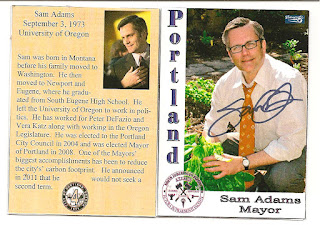 Those of you who live in Oregon may recognize this man.  I started making a set of cards for my granddaughter covering her life.  She is almost six months old and I have started making a set for her when she gets older.  Mr. Adams took less than a week to sign this.  This is the second card in the set that I have gotten signed.  Kenny Sears a NBA player from the 50's and 60's signed card number 2.  Kenny is from Watsonville, CA and played high school basketball with my Dad.  I will do a post on the set soon.  Eventually I will get back to the Padrographs.
Posted by Rod (Padrographs) at 8:17 PM