A much traveler catcher prevails over a Hall of Fame closer

The votes are in and the catcher for nine different teams in a twenty year career wins the vote.  Benito had six votes, Trevor had five and Pedro just three.  Benito Santiago, 1988 Record Breaker takes the number seven spot in the Padres Frankenset.  Up next is the number eight spot.  It is a battle between a manager and a member of the playoff Tampa Bay Rays. 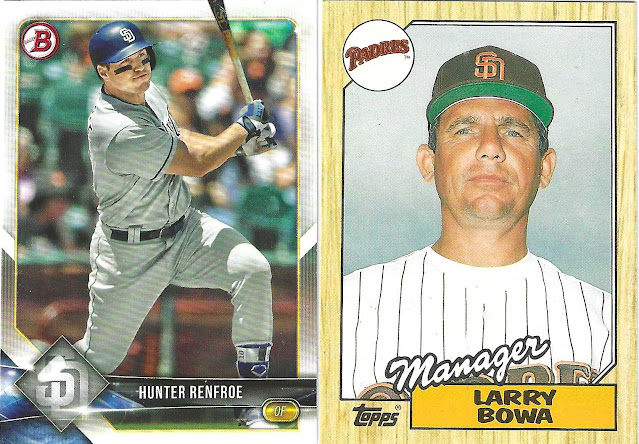 Larry Bowa managed the Padres and played for them in 1966 when the PCL Padres were an affiliate of the Phillies.
Remember every vote you cast enters you into a contest when we get to card number ninety-nine.
Thank you for stopping by and for your assistance.
Posted by Rod (Padrographs) at 5:08 PM

I like the Bowa, but gotta go with my Rays and vote for the Renfroe.

Renfroe. I've like him since his San Diego days, plus, it's just a better card.

Bowa card is not exciting, but it's tough to vote for a Bowman card. Bowa.

I'd go for the Bowa.

The Renfroe is the nicer card visually, but having a star player show up as a manager in an unfamiliar uniform certainly counts for something. Vote for Bowa.

My vote is for Bowa.

Renfroe. Bowa card is too boring.

I feel like this is a rare opportunity to squeeze in a manager card. Go with Bowa.