The Letter A, Sheet 5 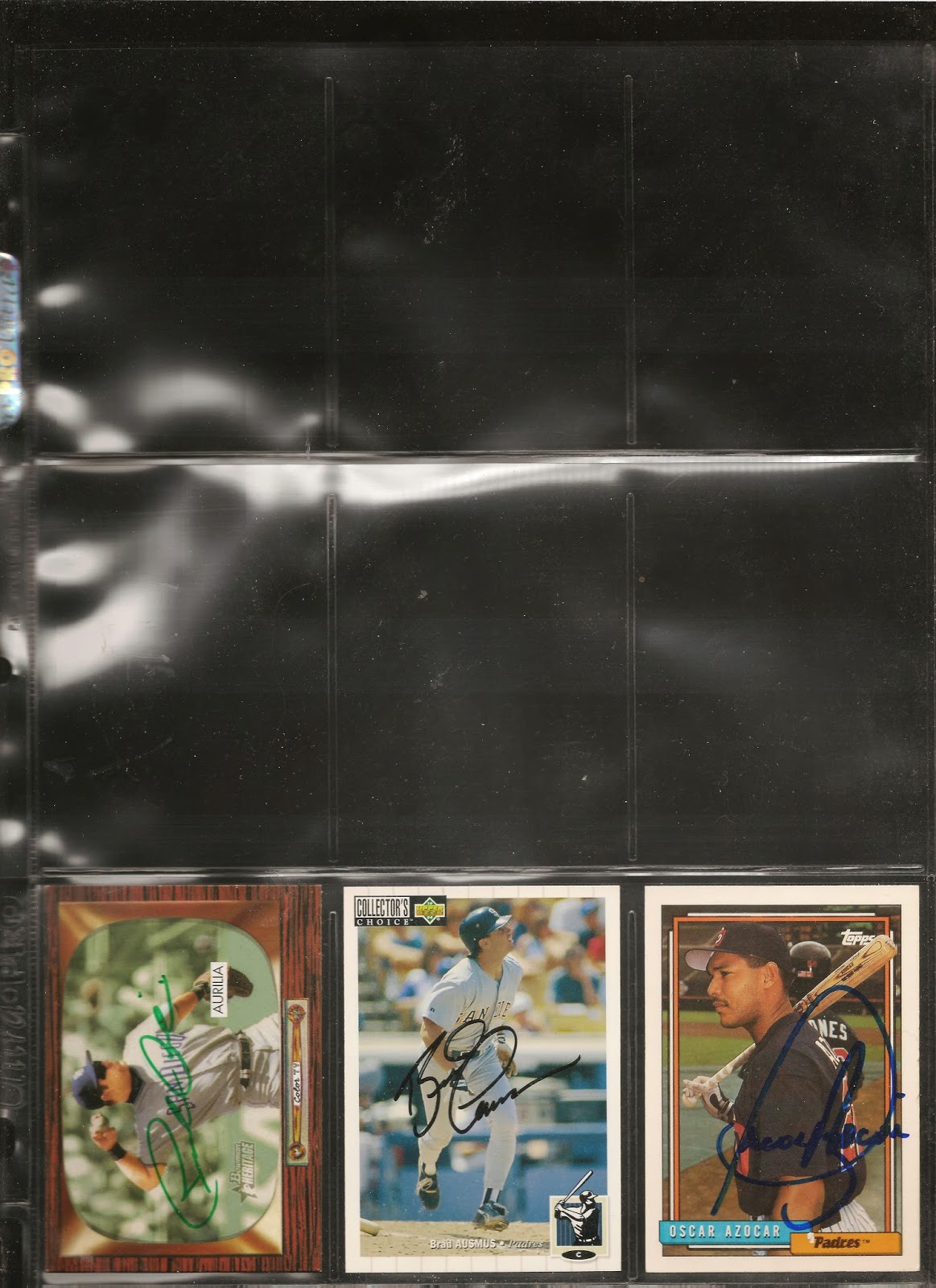 One letter down, twenty five to go.

The Letter A, Sheet 4 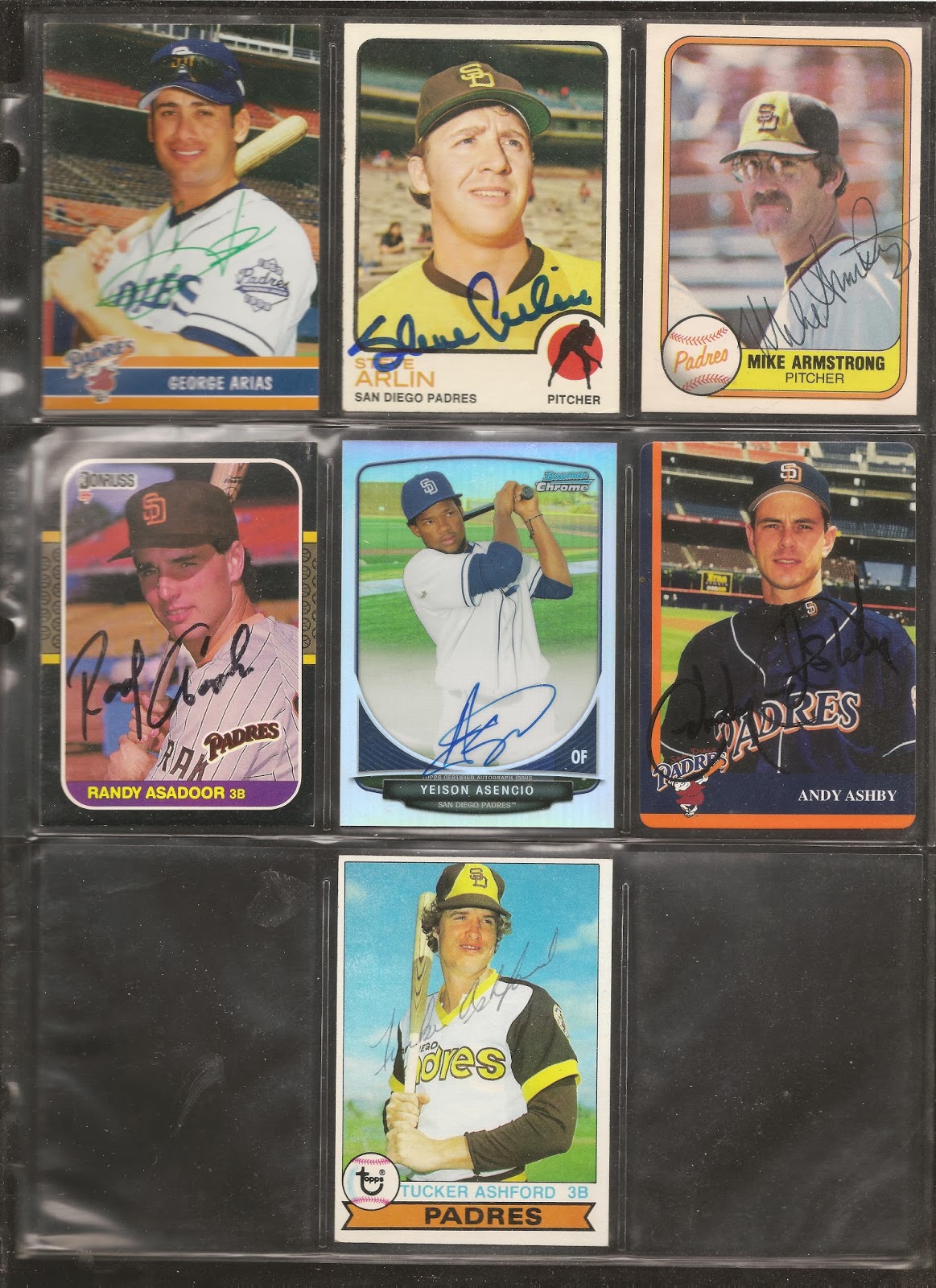 Posted by Rod (Padrographs) at 6:46 AM No comments:

The Letter a, sheet 3 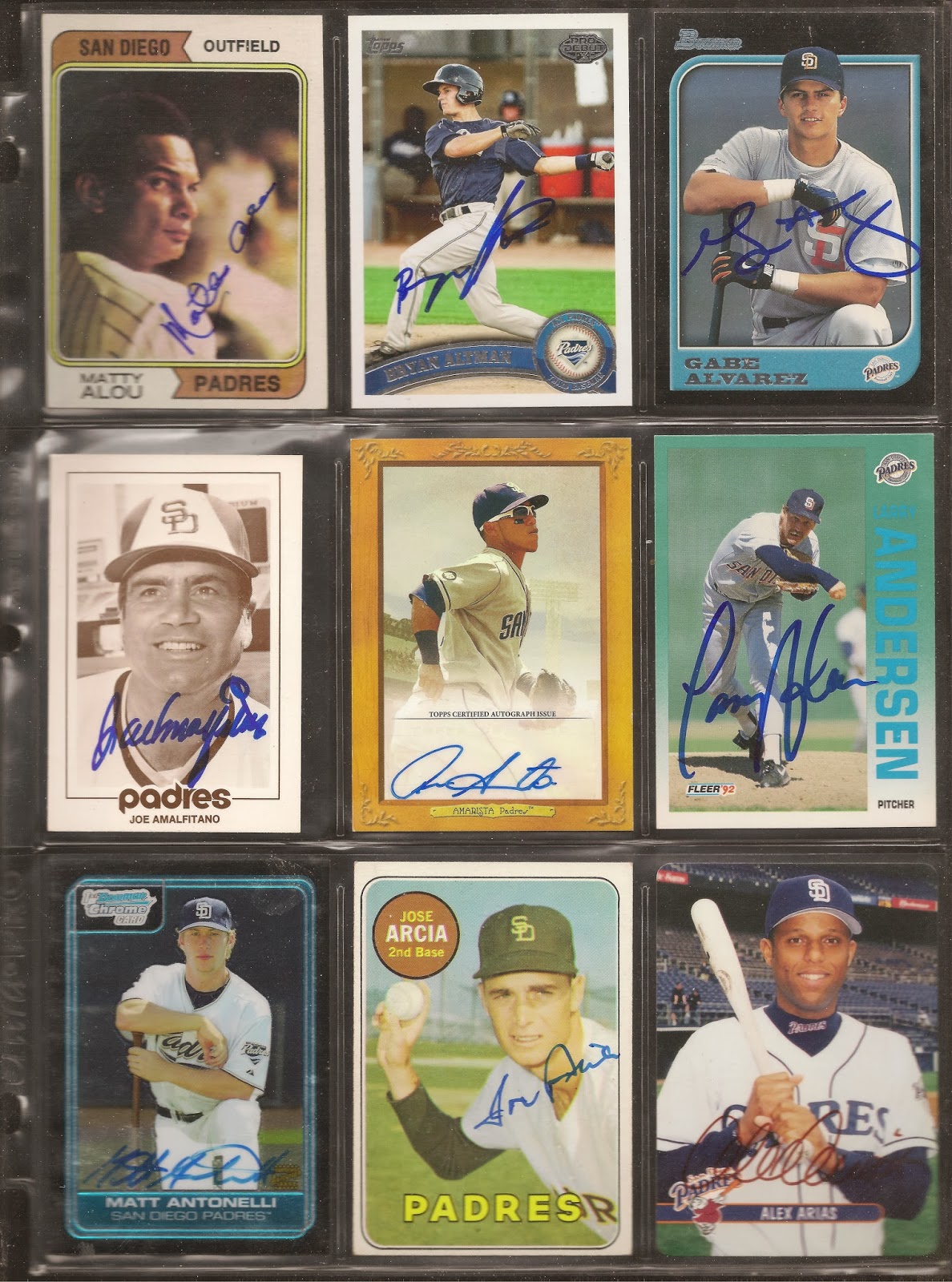 The Letter A, Sheet 2 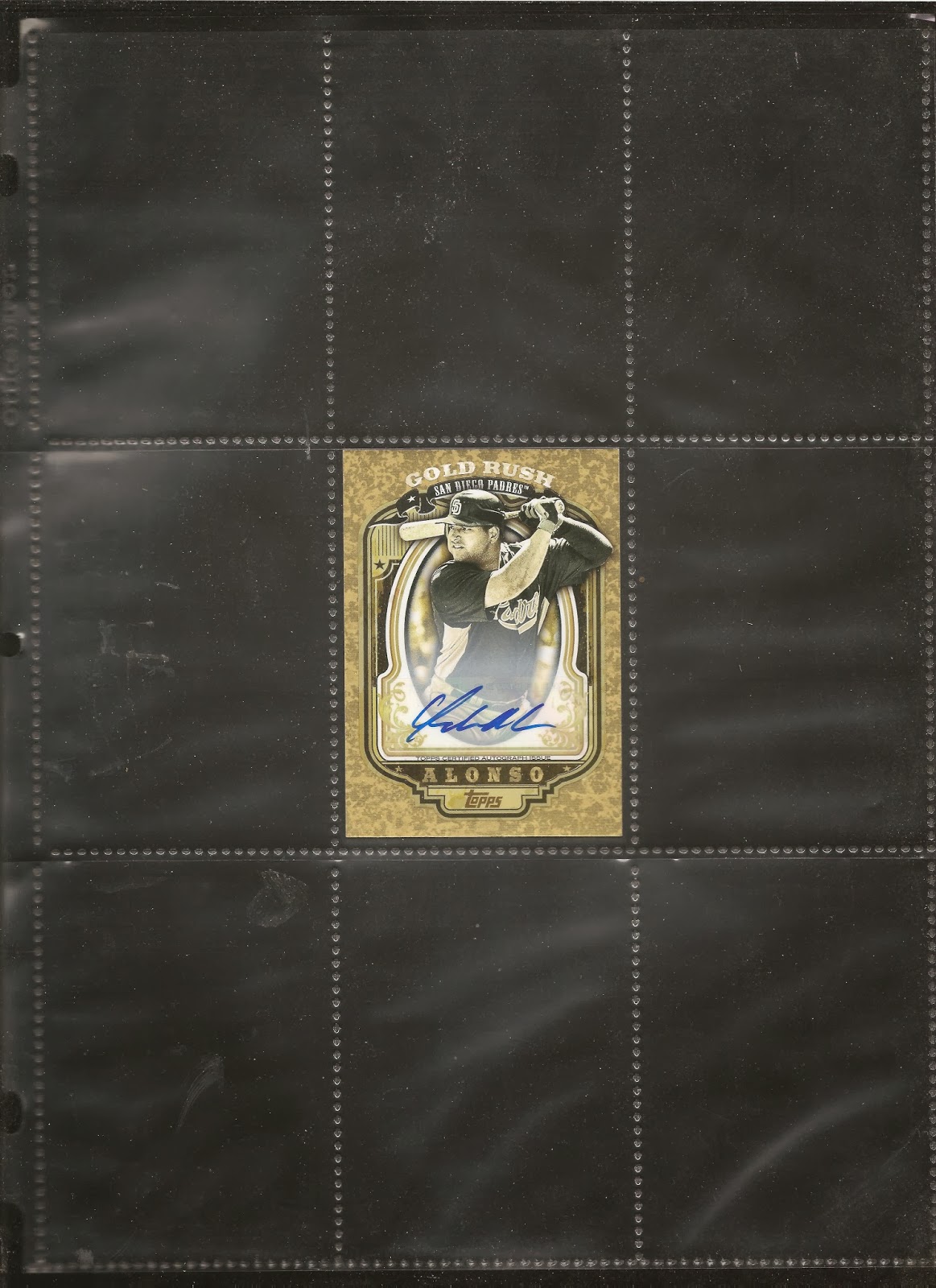 Alonso, Yonder-2012 Topps Gold Rush Certified Autograph; Yonder has played for the Padres in 2012 and '13.

The letter A, sheet 1 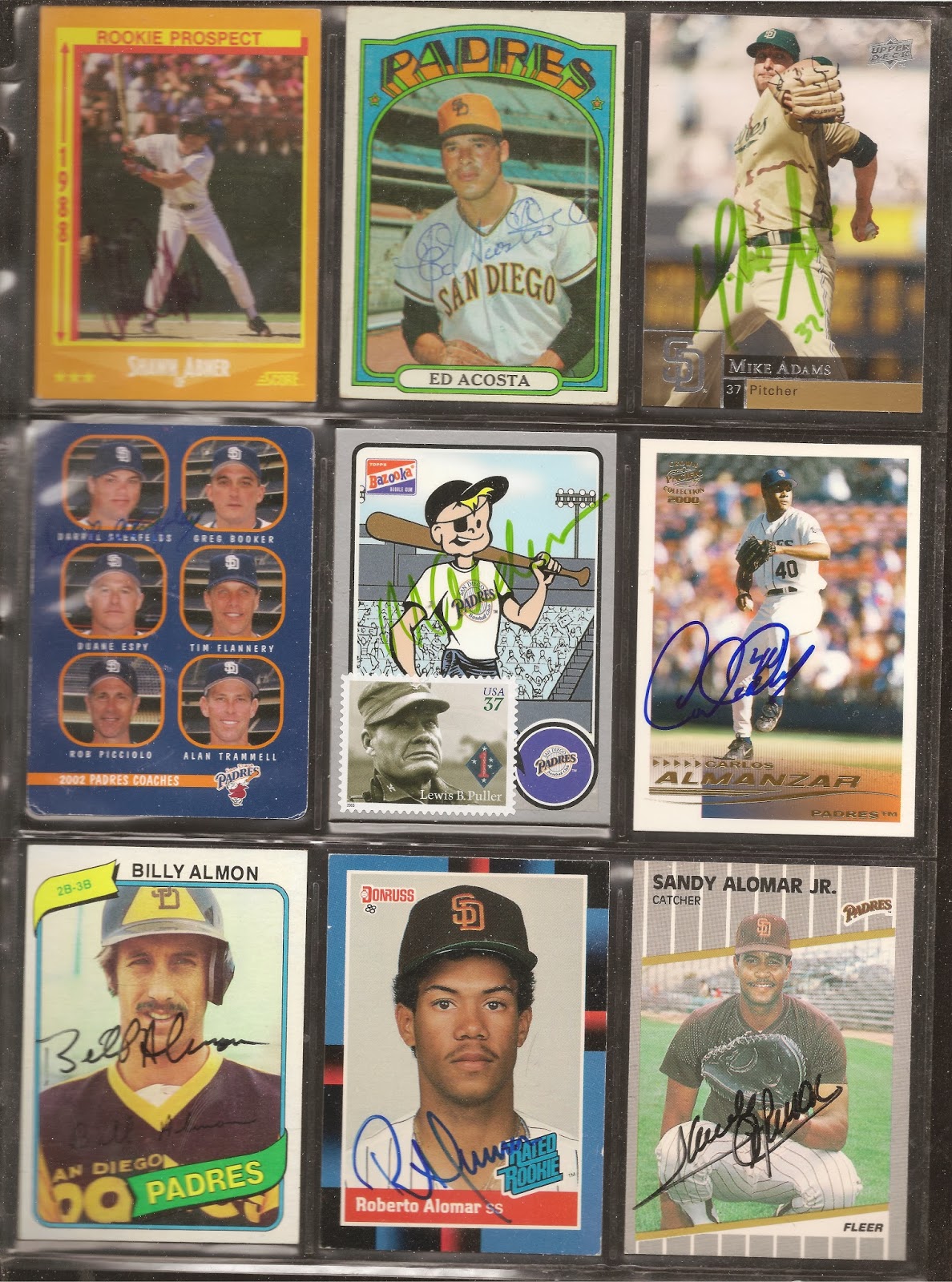 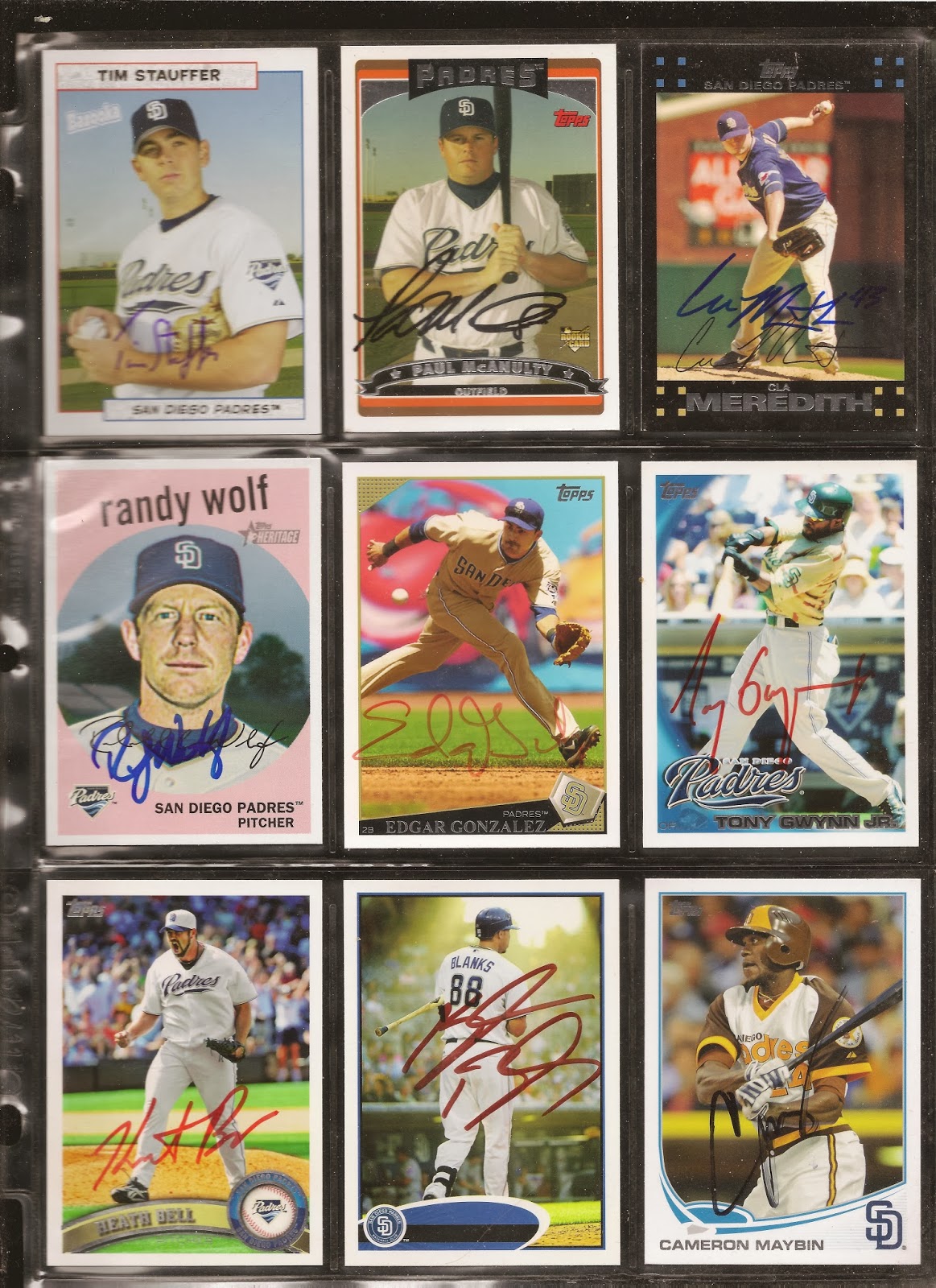 Starting next week I will be presenting the alphabetical cards.
Posted by Rod (Padrographs) at 3:56 PM No comments: 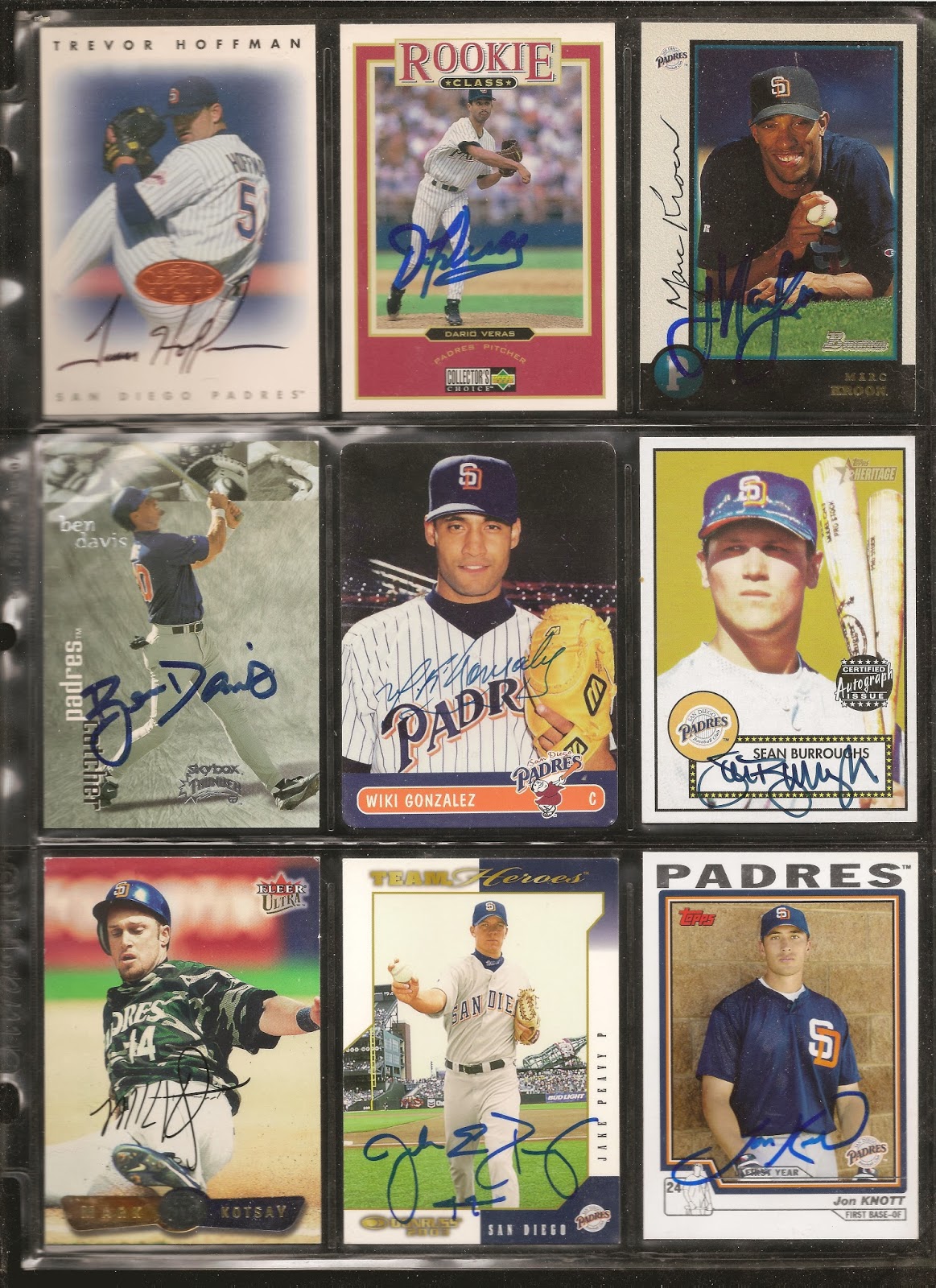 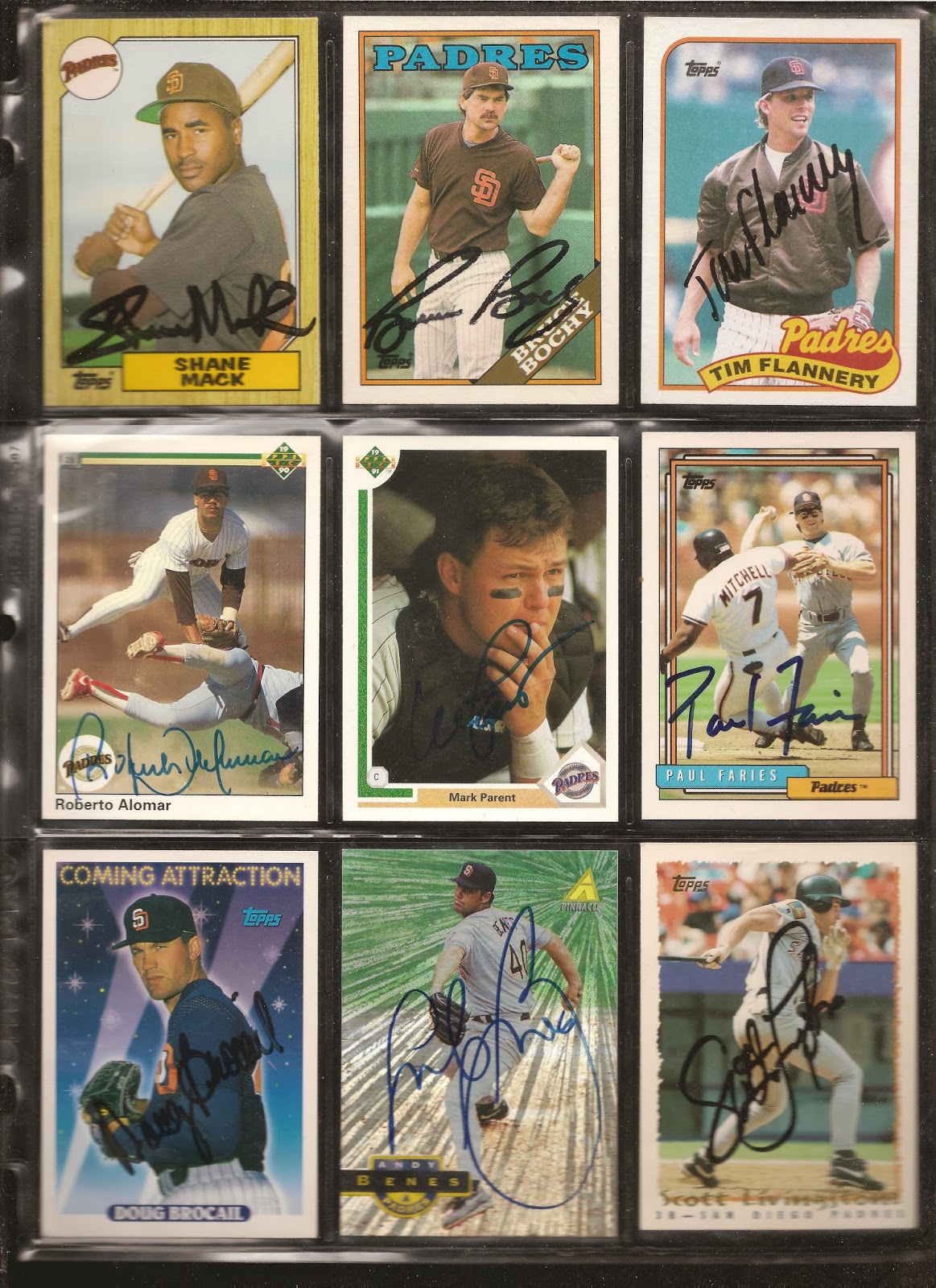 Posted by Rod (Padrographs) at 8:00 AM No comments: 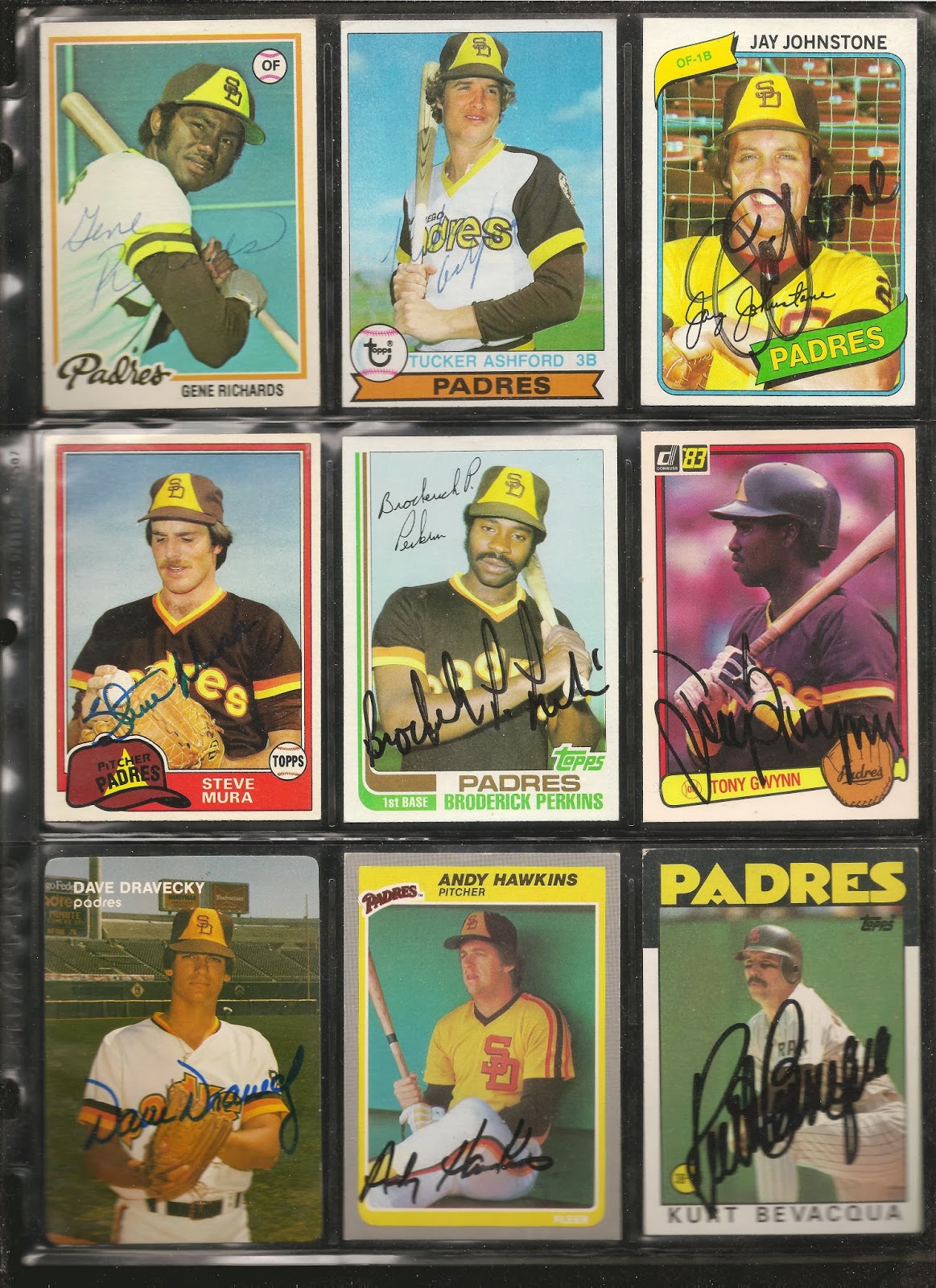 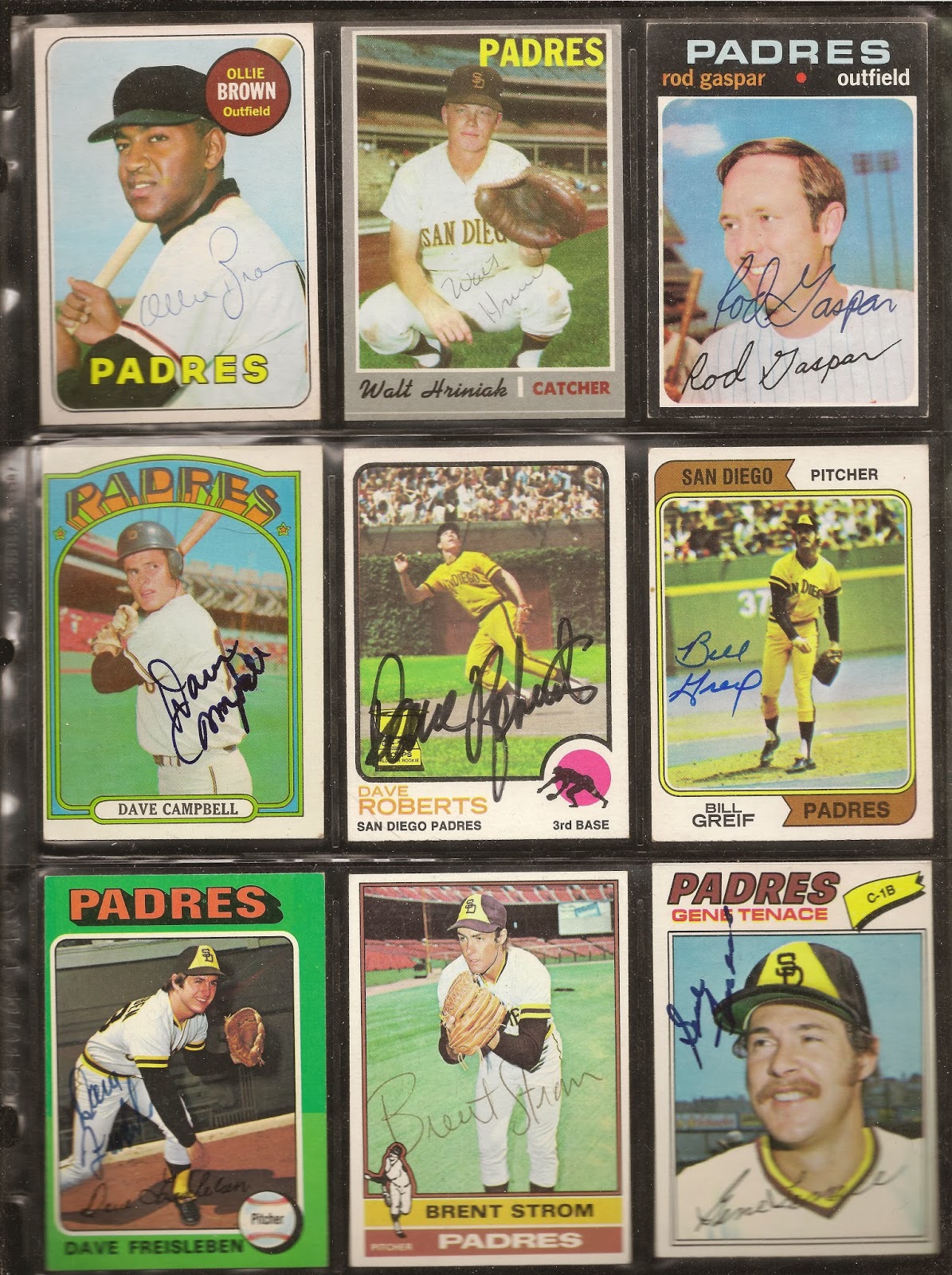 Posted by Rod (Padrographs) at 2:37 PM No comments:

I have been trying to get a signed card of Todd Hutcheson for many years.  I have even made cards and sent them to him.  Never heard back.  He has been a Padres trainer for many years and is now the head trainer.  I met him about the time this card came out in 1986.  I would go to Civic Stadium in Portland any time the Las Vegas Stars (Padres AAA affiliate) would come to town.  I would go to the whole series and talk with players, once and I while I would give them rides around town.  One series my friend Dan Fields and I made up a sign with blown up cards of Todd on it and dubbed ourselves the Todd Hutcheson Fan Club and hung it on the railing above the Stars dugout.  It was a hit with the whole team and Todd invited Dan and I down to the clubhouse after the game and showed us around.  This card brings me to 842 different signatures.  I will start showcasing the cards again next week, a page at a time. 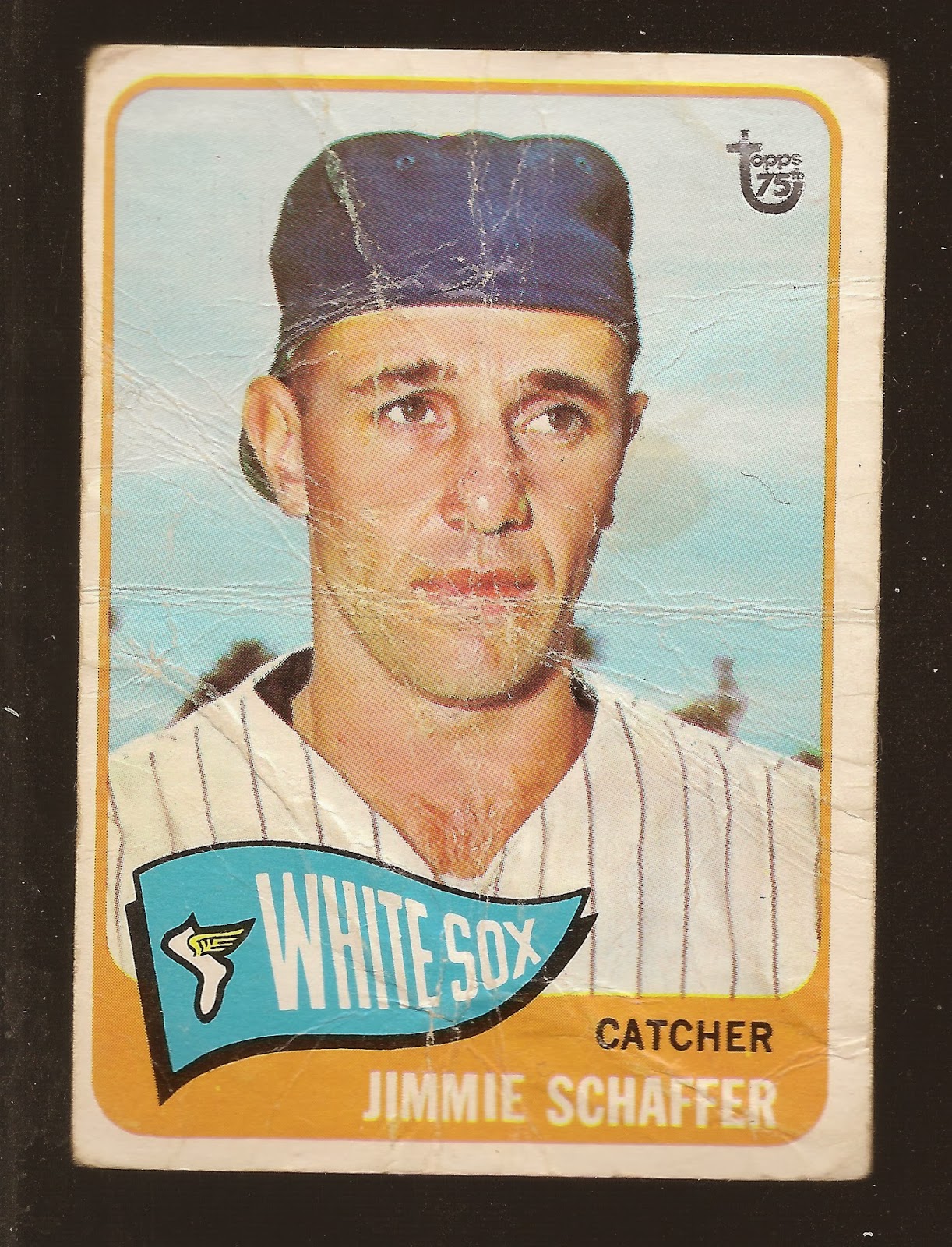 I have bought about 10 packs of Topps Series 1, which is probably all I will buy.  I bought several team sets so I could have cards to send to those I don't have signatures of yet.  I got this in one of my packs.  It looks like it had been folded multiple times and left in someones wallet and sat on many times. I took it into the LCS and showed the owner, who has been in the same location since 1982, he said he would be embarrassed to even give that to someone, as would I.  What does Topps think that collectors are so desperate for old cards that we don't care about the condition.  Many of the cards I have seen on eBay are in the same condition.  It's like they gave some one $100 and said this is your budget get as many cards as you can and we don't care about the condition. 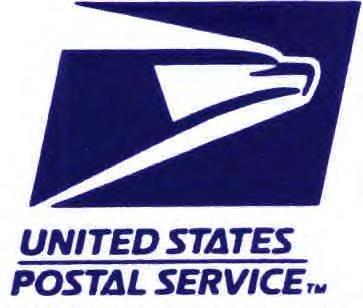 I sent off my first cards of the year yesterday.  It has probably been a year or more since I sent out cards to anyone.  I sent to Nick Hundley, Robbie Erlin, Tommy Medica, Eric Stults and Tyson Ross.  I already have Hundley but I am thinking I might use him for my yearly collection.  I sent two cards, a letter, a sharpie and an SASE to each player.  See who I get back.  I still need to send out a few cards of guys that were on the team last year and only had cards in the update set.

I collect cards of several basketball players rather haphazardly, Lakers mainly.  I collect one player zealously at least one card of that player.  Several years ago Jeff Pendergraph (now Jeff Ayers of the Spurs)  played for the Trailblazers and my son and I were impressed with his enthusiasm and my son started collecting his cards.  One card was this one, it came out in Panini Update 2010/11.  There are 499 of this card, this is #105/499.  This is the 50th copy of this card we have and we want the other 449.  I check eBay, COMC and the Beckett Marketplace regularly.  Any other places you can think of.  If you local card shop has it for less than $5 buy it and I will reimburse you.  I bought this one for $4.95 including ship.  If it is more than $5 let me know and I can work something out with you.

Good Things Come to Those Who Wait 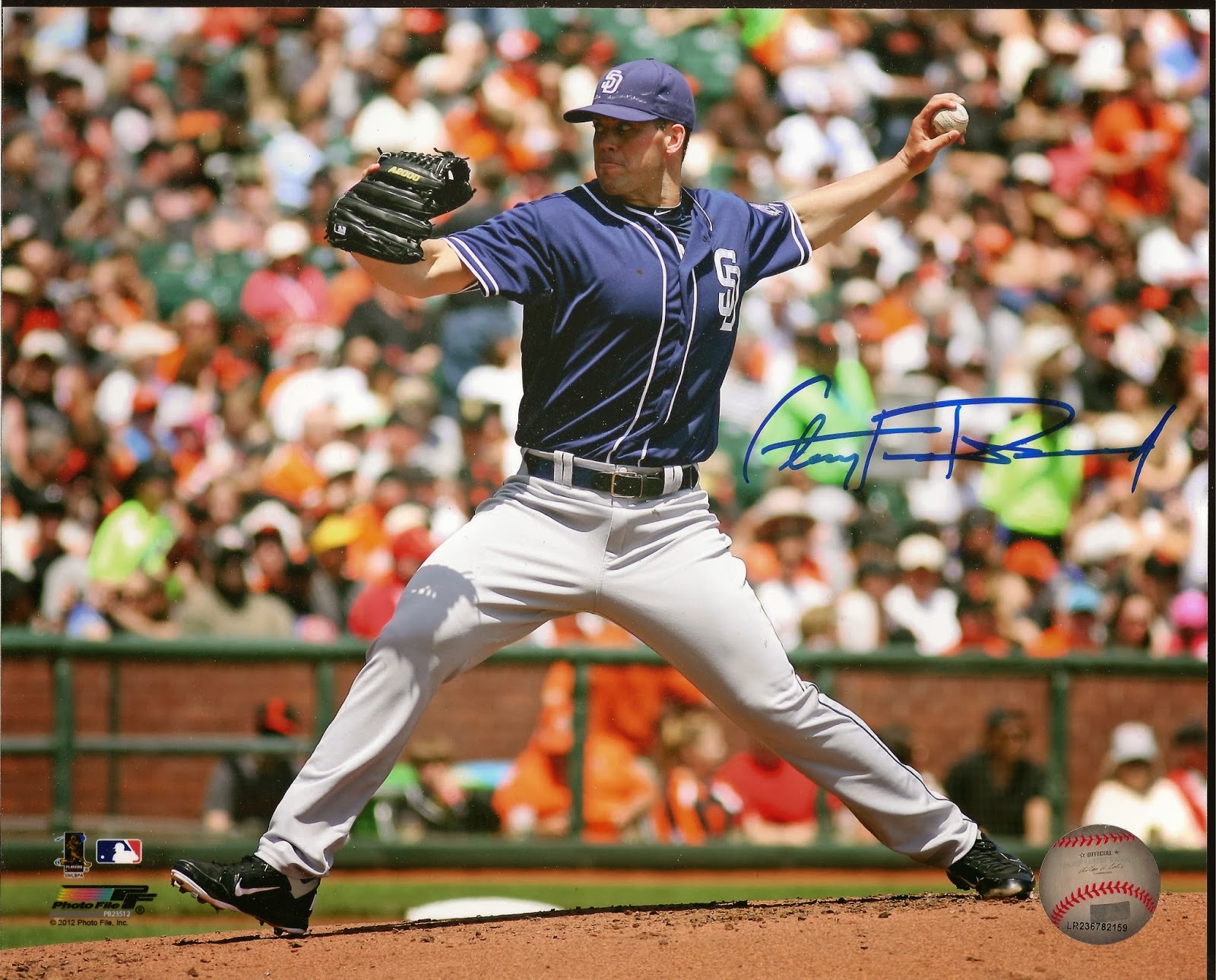 I mailed this 8x10 to Clayton Richard toward the end of the 2012 season.  I got it back two weeks ago.  Wondering what the longest you have ever gone between sending something out and getting it back.  Believe it or not this is not the longest for me.  Kurt Bevacqua once took 3 years to get a baseball back to me.  Several players have taken a couple of years to send cards back and we had moved a couple of times. Luckily I have friends who have lived in the same house for thirty years or more so I used them for a return address and they get my returned mail.  Better than it sitting in a dead letter office somewhere.

Clayton Richard has been one of my favorite Padres since coming over in the Jake Peavy trade.  He has had a couple of good seasons and a not so good one and an injury filled one.  He is currently a free agent whom I hope will return to Petco Park.

I have gotten overwhelmed once again by the hobby, even though their is only one company making baseball, sorry I don't recognize the logoless gentlemen from Panini, they make too much stuff that is just the same design over and over with just a small difference.  Right now I am going to concentrate on my Heritage team sets, Padrographs and Jeff Pendergraph Christmas cards.  Oh and any new Bip Roberts cards.  Travis "Punk Rock Paint" Peterson, soon to be father is now the holder of the Gospel of Bip.  I also spend a lot of time on my other blog, Readerman.us, where I review everything I read.  Last year I read 136 books, not hard when you have a one hour commute each way. I hope to be back on a more regular basis at least once a week.
Posted by Rod (Padrographs) at 7:25 PM 2 comments: