Padrograph #1219, The Joy of an Almost Completed Set and the Nola Fan Club 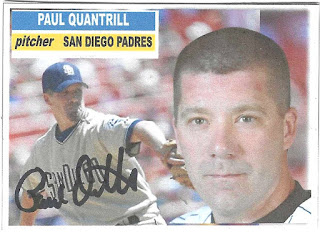 Back in February I sent a custom card to an address in Florida for Paul Quantrill.  I knew someone who had used the address.  He told me to write a note on the envelope to give the cards to Paul when he came to visit.  I got the cards back on Monday after a two hundred and sixteen day wait.  Paul appeared in twenty two games for the Padres in 2005.  He is part of one the two father-son duos to have played for the Padres.

I only have two cards left to complete my 2020 Big League set.  They are both on the way, of course they were two big players.  Bo Bichette and Luis Robert.  It is really a good looking set.  When it is complete I plan on doing a post on it.

I have a eight year old Granddaughter who hangs out with us a lot.  When the Padres picked up Austin Nola from the Mariners she heard me talking about it and we discussed him and his brother Aaron and where they played.  She decided we should collect cards of the brothers.  If you happen to have any cards of Aaron or Austin that you wouldn't mind parting with my granddaughter, Nola would like to collect them.

Thank you for your help and thanks for stopping by.

Outside of my own PC's... I don't keep stuff very organized. I probably have some Aaron Nolas sitting in a box somewhere, but right now I don't really have the extra time to dig through them.

But don't worry... I just purchased a "lot" of Aaron Nolas on eBay and the seller is going to ship them directly to you for your granddaughter. And from this point forward, I'll start pulling the brothers for her. I think it's awesome that there's another collector in our hobby.

By the way... I received your package last week. The plan is to open it up this Friday after my last period. Thanks in advance!

Glad to see you back posting! I'll see if I have any Nola's hanging around.